Hey. I am back one last time this month, with the first preview for the new mini-set for November… which features the curvy MILF alchemist Faye and some lusty tentacles! It has been far too long since I did a tentacle mini-set… and no, the vines from the mini-set two months ago don’t count. Also, it was Faye’s turn to star in a mini-set… and so everything just worked out nicely. (I also wanted to bring back the “Box o’ Tentacles” from a few previous mini-sets… a concept that I have refined over time – and rather like.) I think this will be quite fun, and I really like it already, and I hope you all like it as well! 🙂 [EDIT: Second preview added!]

As for the story/setup, it is a bit more simple this time – to help counterbalance the long one last month. But it is still a few paragraphs, so I have put it after the ‘Continue reading…” tag below – click that to see the preview/setup story!

So – almost everyone in Lithorca is more or less aware of Faye’s situation, regarding her general lack of companionship and/or sex… and she had already tried most all of the best sex toys that were readily available; and she had even tried to make her own out of blown glass and even magic crystals. However, none could keep her particularly interested for very long. But one fateful day, a noblewoman that came by for some lust potions and told Faye about a strange merchant in town that sold magical boxes of tentacles – specifically made to sate particularly lusty and/or desperate females. Nobody knew who the creator of these boxes was, but they had someone down in an alley by the marketplace selling the special boxes. Supposedly, no woman yet had been unsatisfied with their purchase… and many even came back to buy more. Apparently they were quite popular with many noblewomen… and also a big hit at some of the more questionable brothels. Allegedly the smaller ones were also quite affordable. Her business had done quite well for years – so money was not really a problem; however, her usual loneliness was… but with luck, it would not be for long.

Faye was definitely in significant need – and so did not hesitate to go and buy one of the strange and questionable boxes. She quickly found the man selling them – who turned out to only be an assistant of the strange merchant that created the boxes… or so he claimed. However, he was more than happy to sell a box to Faye – and let her choose what size she wanted. There were many options: the tiny “Travel Size” box, the medium “Personal Size” box, a large “Couple Size” box, an even larger box that read “Party Size”, and then finally there was a huge crate with many straps around it that read – “Convent Size!” and below that, “Extreme danger, open at your own risk!”. The busty alchemist knew the larger ones were out of the question… they were extremely expensive anyway – and she also suspected that the tiny one would not be nearly enough for her; but she had trouble deciding which of the remaining two she wanted. Since she was slightly out of practice sexually, and had intense suspicions about this whole thing in general, she bought the “Personal Size” box – the second smallest one; which was only cost two week’s profit or so – fairly reasonable for an allegedly high quality sex toy. Fortunately, it was also small enough for her to carry back to her house by herself – although the assistant did mention that they offered free delivery.

Eager to try out her new toy, Faye rushed home and took it up to her bedroom – where she read through the papers included with her purchase. Most people apparently didn’t read these – either because they couldn’t read, or because they were too horny to care about the details. However, the instructions had a great many warnings on the pages that accompanied the simple first sheet. Apparently, this was a living, magical creature that could change and adapt to it’s owner – according to their preferences and needs. It would find their sensitive spots, and do the best it could to pleasure both of them. However – there were also assorted dangers involved, which increased with the size of the box purchased. Apparently, these tentacles were even capable of impregnating women – but only if they truly desired it. Faye could not imagine how a woman could ever want to be impregnated by tentacles… and it would never be an issue for her; but at least they did try to warn people about it. There were other warnings as well – mostly about complications and dangers if someone tried to use magic on the tentacles, and the obvious advice about not opening the box in public… but there were also some care instructions at the back. They recommended that you not leave your new “pet” unattended for over two weeks – or else it would get “thirsty”… and be noticeably more aggressive when it was next used to properly sate itself.

With all that out of the way, the curvy alchemist quickly removed her clothes and drank one of her more moderately powered lust potions… and proceeded to sit on her bed, where she eagerly slid the top off of the box. A bright light lit up as soon as the lid was removed, and several wet, squishy tentacles burst out of the box seconds later. They could sense and smell the female nearby – and were already feeling around for that female, in order to “play” with her. She reached out to touch one of the medium sized tentacles, as several others started to touch her in return. She had high hopes for this new toy… and the busty drown MILF was unlikely to be disappointed with what was to follow. 😀

You can all check the tags on this post for an idea of what I plan to include in here… but as always, those plans may change. I have no idea what this will end up being in total, or in terms of content types (for the most part) just yet – but whatever it becomes, it will go out to appropriate patrons of mine starting with main rewards next month.

In regard to other things, I will be back with new polls in a couple days – and we will just have to see where things go next month. I have assorted plans already, but I have to wait and see if things will actually work out for once. Obviously this mini-set will get finished – and there will be some holiday side renders… but I do not know what else I will have the time/energy/motivation for just yet.

As always – if anyone out there would like to help support me and/or my work on all sorts of new content; (like the new slave training game I posted previews for a while back, and hope to resume work on sometime soon) and/or perhaps even get access to several of these mini-sets and/or lots of other rewards too, like the other finished story sets, and larger versions of the completed animations I have made/posted, and/or the full games I have also made. (The micro VN and Salune’s Slave Training are still available via my Patreon page… and I am doing what I can on the new game with whatever time I can spare – which isn’t much at all for several months now, I admit.) But anyways, check out my Patreon page!: https://www.patreon.com/redleatherart 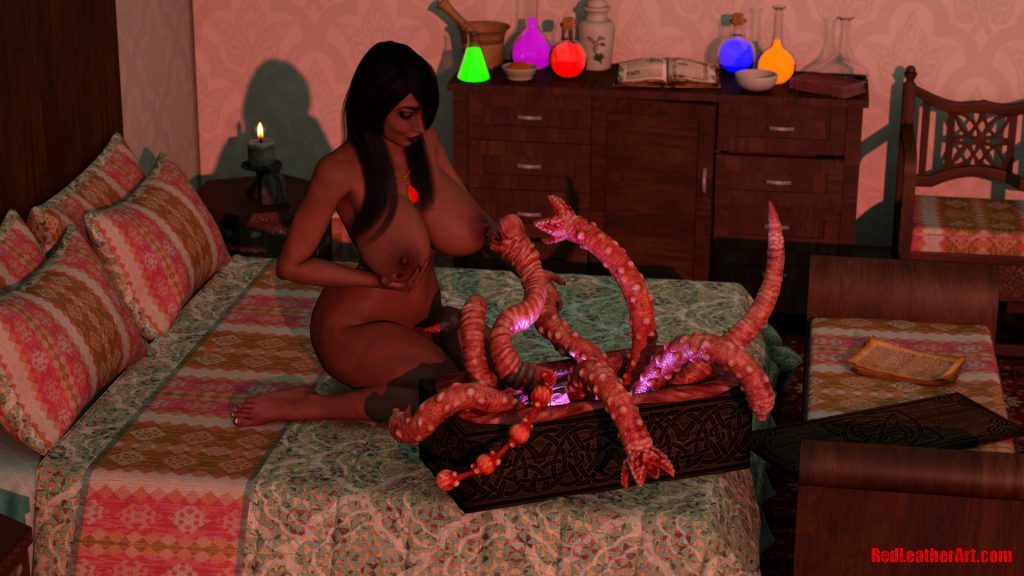 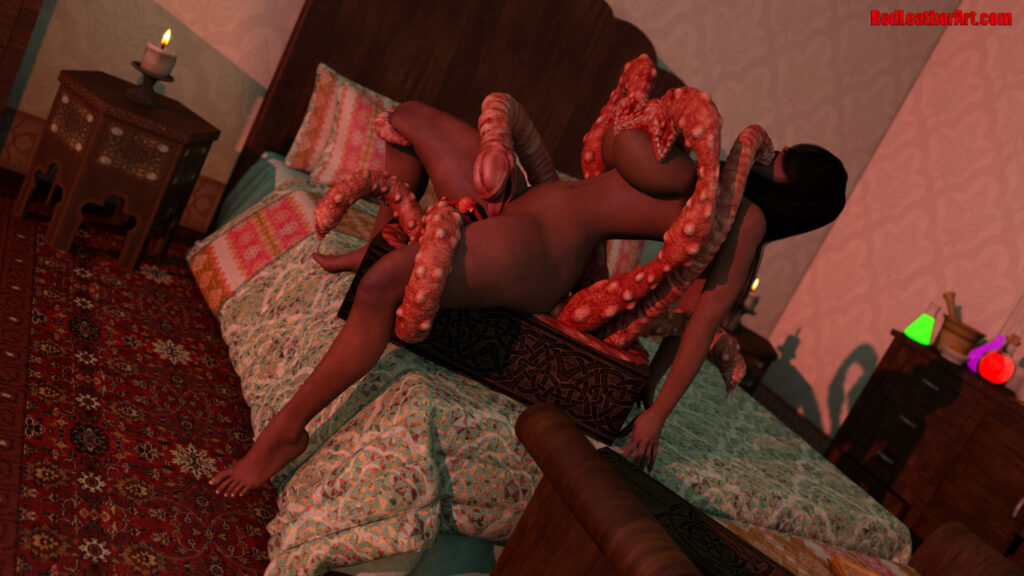