Hi again! So the not so mini-set for my mid level patrons this month is sort of done; I say sort of because I stopped at eleven images… (I was aiming for ten) but I almost certainly will add something more after this. I had to stop myself from going further at the moment, but I want to come back and put in one or two more images if I can get the time before this gets sent out. This is also a story set as well; so each image has a clean and story version to it. The base idea for this set is that Zayla plays with two of her male slaves (a young elven guy and an older human bandit) for a bit of a change. I actually don’t think I have ever even shown one of Zayla’s male slaves before… at least one that isn’t a monster; so this is rather significant.

I think it came out really well and as noted, I like it enough to want to do more; but I really have other stuff I need to get on to right now. (I want to make sure i get at least one of the of the missing events done for the game this month… preferably two.) The set has the sort of content you would expect from a MMF threesome; but check the tags for details, I think I got everything. This one was actually kind of rough to do since I kept hitting the texture limit for the scene and had to repeatedly edit things down a bit to get it to render; but I think it was worth it in the end. I decided to only post one preview for now since it didn’t seem fair to post more than one publicly… but I might post another if I add a lot after this; so I may come back and edit this post to add in another preview. (The one I am currently thinking of posting is one of the exposition images that occurs before the below one though.) EDIT 7/1: Added that other preview image, which is also on my DA page. Regardless, this will get sent out to appropriate patrons when rewards go out early next month along with previous mini-sets from #26 and up.

As usual, if you want to support my work on all of this stuff and maybe even get access to these mini-sets and/or future polls (remember, the topic of this story set was chosen by a patreon poll), check out my Patreon page: https://www.patreon.com/redleatherart. Anything and everything put forward really helps; both in terms of support and motivation. 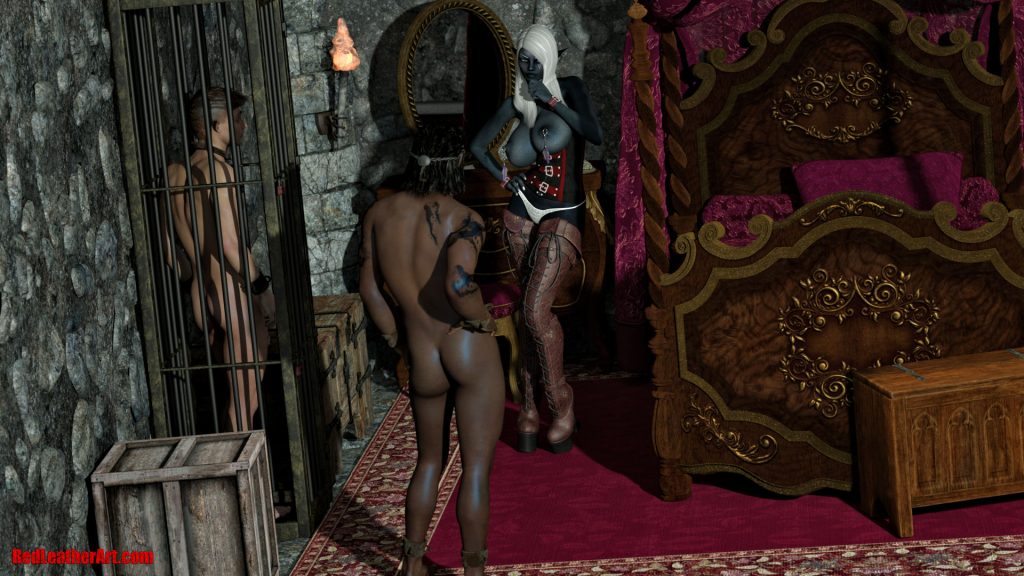 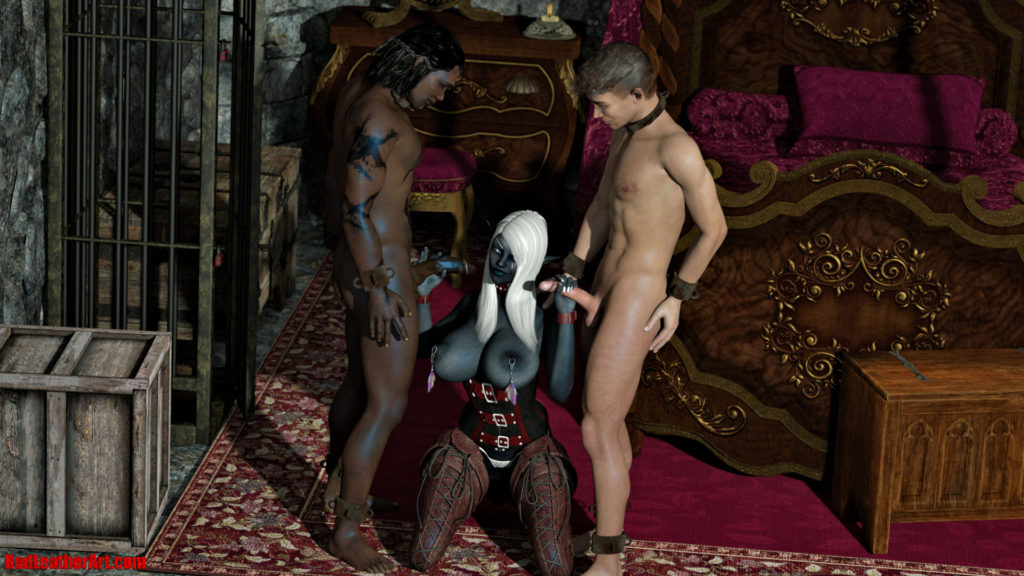 Hey. So as mentioned last time, here is a quick status update regarding some assorted things. First of all, I am currently working on the full size, ten-ish image story set for my Patrons this month, which will feature Zayla. (I won’t give away the full scenario idea yet; my patrons already know though.) I gave several different options in the patreon poll this time, including modern and sci-fi scenarios; but the one with Zayla won by a fair bit as she usually does. So I hope to have at least one preview of that, maybe two in a few days or so; but it looks like it is going to be very fun. A couple new commissions for me got posted recently, and I added them to the “commissions and stuff for me” gallery on my DA page (one on my tumblr), so check that out if that interests you. As for game content this month, I won’t get into that until I finish this image set; but there should be at least one, preferably two new scene sets… and there are only four main training ones left to put in. (I don’t count the endings/other scenes as scene sets… but there is much of that left to do as well.)

In other news, it looks like I will have a lot more time for all this stuff somewhat soon; though I am not sure how long it will last… that really depends on all sorts of things. I hope to make a fair bit of progress on the game during this time, and maybe get it to 1.0 in two/three months. When that happens, I will likely repost some of the older previews and/or make a few new ones for some more general gameplay insight. I will also make a post to all my patrons sometime before the end of the month with assorted ideas regarding other content ideas/events that may happen after this game is done… partly to just let people know what I am thinking and partly to see there is interest for these things. The polls on the right are doing fairly well, but there is still time for results to shift, so vote now if you haven’t yet!

So that went better than I thought it would given that mess last month, and I will see what this month holds for the game beta in a week or so; for now my patrons are voting on which mini-set idea will become a full size image set, and it looks to have been decided already. (Most votes were for one option; more on that later next week I hope.) I really am not sure what else will happen this month, as I am waiting for three/four people to get back to me about different things… and have been for weeks in most cases. So the game beta is doing pretty well and there will be a ten(ish) image story set for mid level patrons starting next month with a preview image here; maybe two, one clean and one story… not sure yet.  I have all kinds of ideas and possibilities on the table in terms of other content and stuff I have been thinking about… especially given something coming up rather soon; I am planning to mention some of this to patrons before mentioning it here, so I don’t know when most of you will get more details. Please continue to vote in the polls here and leave comments with any questions/concerns; I plan to post again next week with an update at the minimum, hopefully with a preview of the not so mini-set for the month.

Hi again. So it’s been a while but so far things have actually gotten better for me in terms of my back. It would seem that I have gotten used to this almost, due to it happening so many times that I now know how best to deal with it. I am by no means 100% yet, but I am far better than I was last post. I added a couple images to the last mini-set; though one is an unused render that has only minor differences. I also have been working towards some content for the hopeful game beta update when rewards go out next week sometime. I still do not want to promise anything, but I am fairly sure I will have something to add; I will not know more until mid weekend sometime. However, I needed to post now to update the polls and I just thought I would mention how things are going. I have a few nice commissions that were done for me by people on deviantart  few weeks ago, but for whatever reason both people in question have basically gone AWOL for two weeks with no real explanation, so they haven’t been posted yet.

As for the polls, last month asked how much story vs sex you prefer in your content; and unsurprisingly most people prefer a balance, with some leaning towards more sex. I think I have tended to lean towards mostly sex in my story sets, with only the first RTL chapter what I would call a balance of story and sex due to the sheer amount of stuff that needed to be set up and/or explained. I will see about working in more story in the future, but with little to no real feedback in general, I have no real choice but to do just what I am doing and hope for the best. (So actual comments would really help.) The other poll asked about clothing in sex scenes, and interestingly most people preferred little to no clothing at all. I actually usually tried to keep character’s clothes on in many cases, which is of course much harder for me; so apparently I don’t really need to keep doing that per se, which I will definitely keep in mind. The new polls are up, the first is from around two years back and asks what kind of player character you prefer in adult games and the second one is also a poll from two years ago, asking your gender. (I am just curious how things have changed in two years, if at all.)

It would also be really great if anyone wanted to leave an actual written comment with either general feedback for me and/or explaining their character preference from that first poll. As I have mentioned, I do take polls into consideration, but I take written comments and such far more seriously. I plan to post again sometime mid-next week with an update regarding my progress on the game beta and whatever else.