Hi again. So below is a composite preview made to show Salune’s old cock vs her new one; minor edits notwithstanding. As you can see, the new one looks much better overall; and yes I did shrink it a tiny bit girth-wise to balance things out and enable better fitting into… various things. As you can see, I also can finally get the damn contact shield working on the new one; something the old one simply refused to do properly ever since I got Octane. (In poser, that melds with the model to create a seamless blend; in Octane it collides and makes a crappy black tearing around the edges that I have never figured out how to fix well enough.) In the past I have had to work around this obvious issue; but now better close ups are possible in addition to other things! (All sorts of fun morphs and things are available with this new model; such as foreskin and a cock ring!)

The only downside to all this is that yes, I have decided to redo all the current content for the game so far; (I don’t really see any choice, the new one looks so much better and any add on content after the fact won’t match unless I redo this) and it is looking to be a rougher job that I initially thought. I should be able to get all the re-renders done before next month’s rewards go out; but I am unsure how much time I will have left for new scenes this time around. I was hoping for one or two, but as it stands even one may be a challenge; I will do the best that I can. I am redoing almost twenty-five images as it stands; and many are getting minor corrections as well. This fancy new cock model was not something I ever considered or accounted for when making this, and though it will make everything better visually, it will push things back a bit as well; however, I think it is for the best.

I plan to re-post(?) some game scene previews next week sometime, likely the same ones I had before except with Salune’s new cock. In the mean time, please vote in the polls if you still haven’t yet, and check out my patreon page if you want to get in on some of this fancy new stuff! 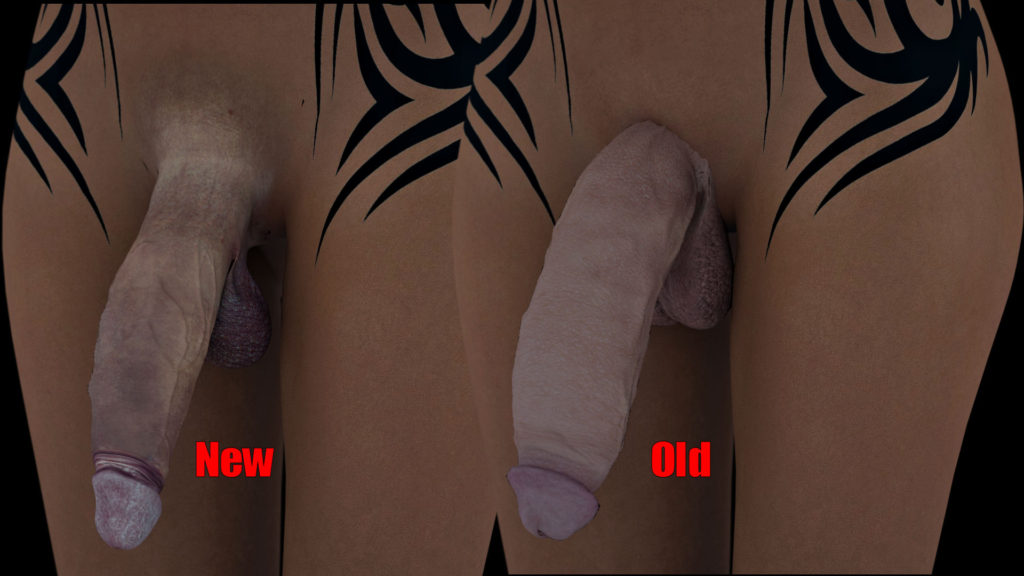 Hey again. So as the title mentions, this month’s Patreon mini-set preview is below; this month features Zayla waking a sleepy little dragon so she can inspect his “assets”. The mini-set is service focused, with some oral and titsex and finally one special image at the end which goes a bit deeper. It is currently six images total, though that may go up as always. In a final warning; this is the first new mini-set of the next cycle: all $15+ pledges after next month’s rewards go out will only get this mini-set and the previous two. Mini-sets 1-26 will get locked off around the eighth of February; although I may put some way to get access to the old mini-sets at some point in the future. I made this set with a dragon because it ranked high on the last monster poll I did (and it is doing decently now) and I have been meaning to do something with one, so I finally did; hopefully everyone will like it.

In other news, a fancy new cock model made by fellow 3DX artist erogenesis has come out; and I of course bought it straight away. It is terribly nice, and barring a few minor issues due to my usage of Octane; it is everything I could want in a cock model. (With more to come!) The problem now is that I am unsure how to proceed in regard to the game I am working on. I will almost certainly replace Salune’s cock in the future, (the new model functions much better) and the almost half of the content I have already made uses her current cock. Not that there is anything wrong with what she has… but if I do replace it later, I really should redo all the scenes I have done already. (I already hope to add to this game after the base content is done and it would just be weird if the content did not match.) I could do it… I keep all my old scenes just in case of whatever; but it would take at least a solid week to redo all that at the minimum. Quality would theoretically go up, and I could fix some minor issues in a couple renders… but it would take much of the development time I was hoping for this month. Essentially I am still testing some stuff with the new model and hope to come to a conclusion here early next week… I will likely make a small post noting what I decide; though I am leaning toward redoing it.

Quick final note: there will be a patreon mini-set poll next month for mid level patrons and up to decide the topic of next month’s mini-set, if that interests you. I have a variety of topics on these polls, so they are a good way to get more of things you like. So if you want to support my work and/or get in on the old mini-sets before they are taken off the list, check my newly updated Patreon page! https://www.patreon.com/redleatherart 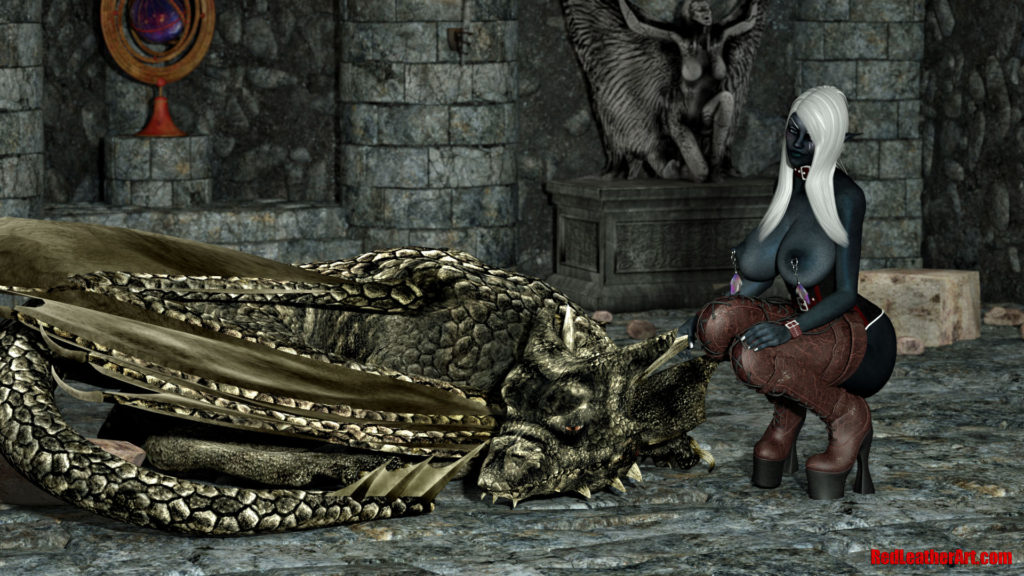 Hey again, I just came by to give you all a quick update and make two semi-major announcements. Instead of working on the main content for the month so soon, i decided to take care of all the clerical stuff that needed doing. (Still working on updating one other thing, so it’s not mentioned here.) As the title suggests, my Patreon page has been updated slightly; and I have cut out a lot of the body text that used to be there in addition to updating the reward tiers. Most things are the same, but I had to make a few minor edits due to this new game being done soon(ish) and some other content that I am planning to try out in the near future. The other announcement is of course that I am giving commissions a test run, to see how that goes. Yes, technically commissions were available on my Patreon as a higher tier reward, but now there are other options as well as the Patreon tiers. (Though those are still the best deal overall.)

Check the commissions page up top if you are interested, there are other offers on my Patreon page and my DA page as well. I have no idea how long I will do this and/or if it will even work out; but I wanted to give it a shot. In other news, the poll is going rather well; but more votes is always a good thing. Some stranger options in the poll are doing surprisingly well; but there is still time for everything to change, so vote now if you haven’t yet! Otherwise, check back later this week for some other update; likely the mini-set preview and/or another small content update.

Hi again, sorry this is a bit late but here is another preview from the game I am working on; this one is from the lesbian training scene set (which will be implemented in the beta build sent out early next week, along with I hope two other scene sets). This image is from one of the mid level training events, and it shows Salune riding a strap on, worn by another of Zayla’s slaves. I am still trying to get all sorts of other stuff working/figuring out if I want to add images for certain extra events or not. I have no idea what will be done by monday/tuesday, but my mid level patrons will get whatever I can get together. Check out my Patreon page if you are interested in supporting my work and/or possibly beta access to the game so far. Remember, it does charge up front now; so you no longer have to wait weeks to get your rewards! Also I am working though my planned changes to my patreon page, which I hope to get done/live later this month; after working on the game more, doing this month’s Patreon mini-set and whatever else I decide to do. 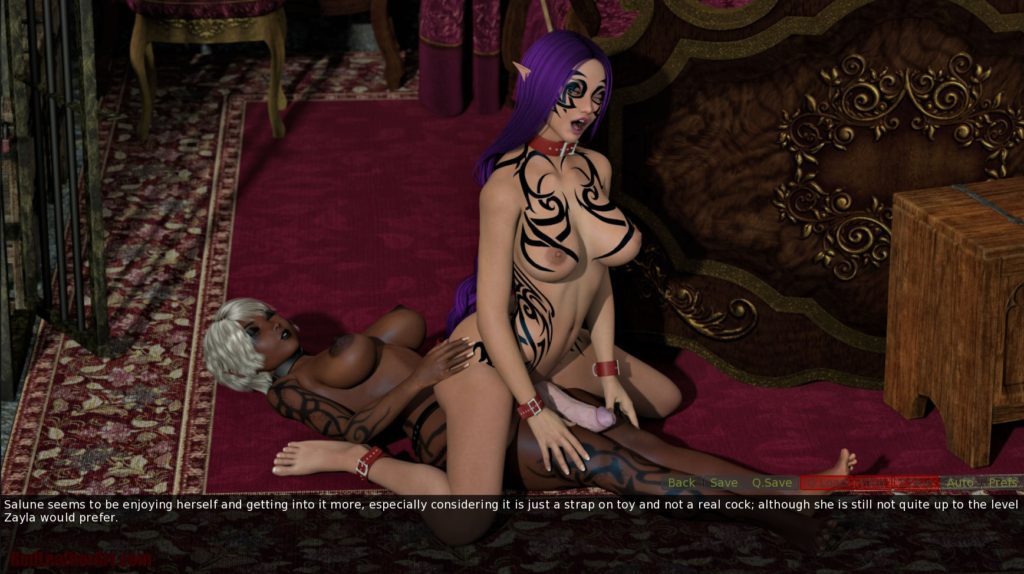 Hi again. I totally forgot to mention/consider the poll results/new poll in my last post, so I came by to sort all that out quick. I am still working on the game and seeing what I can/want to put in regarding the randomizer and a few other things while renders/re-renders finish. I hope to have one new public preview to post here towards the end of the week/weekend; so check back a bit later for that. Regardless, the old polls are done and most people want me to finish this game first, rather than start the next story arc; which as I mentioned I planned to do anyway just to get it done, so that is good. The other poll was a repeat of a very old one, asking about breast size preference. Strangely, this was essentially the opposite of the original one, with most people preferring large-huge. Some upcoming female characters in the next story arc will have both ends of the spectrum covered; (the one with huge tits will be introduced first, though that was already planned long ago) so I think this will all work out since many of the girls in already are on the large size in terms of bust size. In case that was not clear, there will be at least one new main character with average/realistic breasts in the next story arc; just not for a while.

In other news, I brought back another two year(ish) old poll; the big monster poll! (Due to the massive size of this poll, it is the only one this month.) This is a new and updated version of the old poll, with all the old stuff and some new things too! All the stuff listed on here is stuff I either can do, have already done, or would do. (So there are no dud/impossible options.) You can vote for up to SIX things in this poll, so make your votes count. I use these polls to see how popular certain things are, and this one in particular will be rather important so make sure you vote for your favorite stuff. I think I covered damn near everything, but if there is something in particular you want that isn’t on that list, leave a comment and if it is something I can/would do, then I will consider adding it!