Hey again, Happy Halloween. Quick status update for you all here on the main site. I just posted the new DA stuff, and I think that came out nicely, so check that out. As for the upcoming story set though, I have decided to delay posting the previews of that another week or so for assorted reasons.

A long time ago, Patreon charged for monthly pages at the start of the month and only then; so I tried to get things posted shortly before that to accommodate the timing. However, for quite a while now, Patreon has allowed the “charge up front” option, which is to say that you can now pay to get in anytime, if the owner of the page has that enabled, as I do. So there really isn’t much reason for me to push so hard to post previews before the start of the month anymore; as I tend to go back and add/fix things regardless and nobody gets the full thing until main rewards go out a little after the 10th or so of the month.

Long story short, I made the renders and went to do the final text last night and found something to fix in a render, as I often do. However, when I went to fix it I was reminded of how large and messy this one major scene location is, and of the fact that this will be a major recurring location in the chapters to come. I see nothing but trouble with this as it is in the future, and though I did get it working for now I may not be able to later when more things are in the scene. So due to all this, I decided to go back and redo that half of the story set; which is ironically not the location of the main content scene in the chapter. The main scene is quite nice, and I really like it; but I can’t leave the other half of the chapter as it is – it would be awkward and crappy to have to change an established location later on due to my limited render memory. (I can’t just post what I have since the second setting itself may change entirely when I redo it.) So I will fix this in the coming week and redo that scene/location – and in addition to that I will see about adding in a mini-scene to that part of the chapter that I mentioned to my patrons both a while back and earlier today with more detail. Very slim chance that one of the new DA images I posted is a tease for that mini-scene.

Anyway, sorry for the slight delay, but I think it will all be fore the best in the end; I want this first chapter of the new story arc to be good and this really needs to be fixed now rather than later. I should be back with new polls in a few days though.

Hey there. Sorry for the long pause in posts here; I got food poisoning back on Monday and spent several hours throwing up – that left me incapacitated for two days and I lost a third day catching up on assorted things after that. Then once I got back to work on all this, I made the call to redo the mini-set I was working on because I felt it would be far more appropriate with Helenya in it. Long story short, I made this mini-set originally with Salune and another slave character, but it just felt like it should have been Helenya instead; so I restarted the mini-set and I think it came out much better like this. I normally try to not double up on major characters in these Patreon mini-sets, but this really just felt appropriate – so consider this a treat. (Maybe residual ideas from working on that anniversary set, I dunno.)

The mini-set now features Salune being seduced and toyed with a bit by Helenya; but nothing that breaks the rules Zayla gave them. (She left Helenya explicit instructions to never directly fuck Salune’s cock or pussy; as she was afraid that Helenya’s inhuman levels of sexual skill/stamina would damage her somehow and/or tamper with her loyalty to Zayla…) Of course there are many other ways to play with a toy… and Helenya has some other interesting ideas that hopefully won’t get either of them in trouble later. This mini-set is currently seven images and a lot more fun now than it was before in my opinion.

Other than that, I hope to get the new DA stuff done tomorrow/monday since it got pushed back as well; but I think this redo of the mini-set was for the best. (The food poisoning was out of my control of course.) EDIT 10/24: I meant to post this last night but forgot – one of the two new DA images I wanted to make for halloween just isn’t behaving right now, (I gave it one more chance last night) and I really need to focus on work for the new story set at the moment; so the new DA stuff is postponed until next weekend, when I hope to have some time to fix it. Either way I should be back towards the weekend with a status update or early next week with the preview post for the first chapter of the new city story arc. Vote in the polls if you haven’t yet!

A repeated warning as well: I plan to retire most of the old mini-sets soon; which is to say that the $15+ patreon tier will no longer have 10+ mini-sets and the one story set included… it will only have the most recent three. This will not necessarily happen in early January as it did before; it may happen in early December or even November depending on assorted factors. I will not announce exactly when this will happen to avoid having people jump in at the last second – instead, I will say that This month (October) is the last month that all these mini-sets will still be included for sure. So if you were thinking about becoming a patron of mine at the $15 tier (or above), sooner will be a bit better than later for a while. It is only right that I cycle out the old mini-sets every once in a while; otherwise it is unfair to my current patrons who support me each month. Most artists do not even include previous month’s rewards on patreon as I currently do – they just post them for sale on gumroad or something. (I am looking into posting groups of the old mini-sets for sale in a bundle somewhere.) I do also plan to have another Patreon mini-set poll either next month or in December, to decide the topic of that month’s new mini-set for my mid-tier patrons – so that is also something to consider if that idea interests you; I am considering changing how I work those polls as well, but that may not be ready before this poll happens… we will see.

As I usually end these with, if you want to support me and my assorted works and maybe even get access to these mini-sets and/or lots of other rewards too, (including the full 1.02 release of my new game) check out my Patreon page: https://www.patreon.com/redleatherart 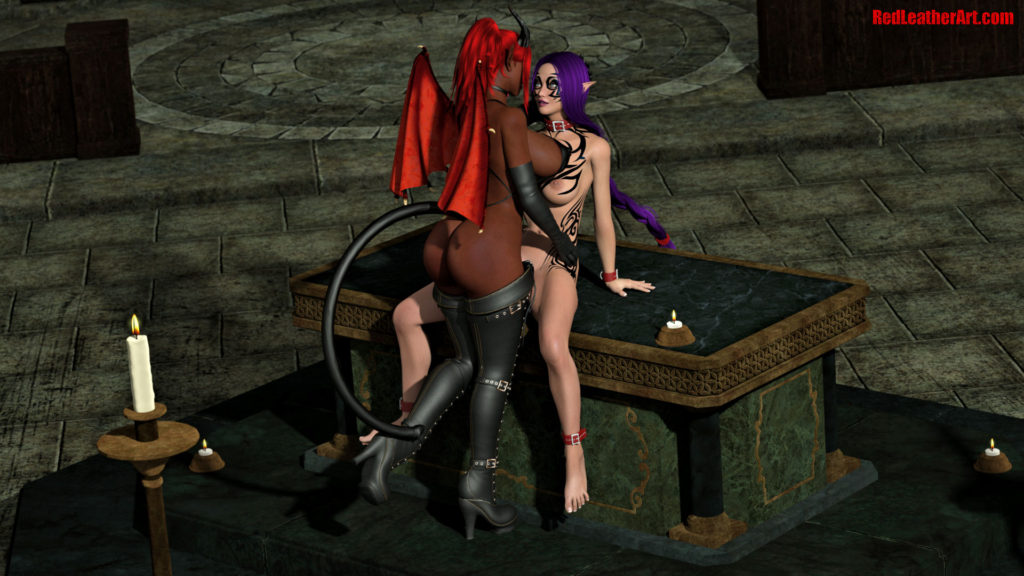 Hi again. So here is that retrospective post on the Road to Lithorca (RTL) story arc; this is going to be long and have a lot of topics addressed, so I am putting the majority of this behind a read more break just to try and keep this from taking up the entire front page of my site. So click on the read more link below if you want to read all this info about the RTL story arc! If this sort of inside info does not interest you, I guess just vote in the current polls on the right there if you haven’t yet and/or check out some of the RTL chapters posted free in the freely released sets tab up top!

END_OF_DOCUMENT_TOKEN_TO_BE_REPLACED

Hey again. Sorry for the delay with these posts but I have been busy with all sorts of crap; but among other things, I got my cable lines fixed and a new modem so things seem better but not totally fixed yet. The old polls are done; and I went over the special poll already, so that just leaves the favorite chapter of RTL poll. With this one I was hoping for more votes, but there are enough to see what people seem to like. RTL 3 and 4 seem to be favorites, with 12 and 9 close behind. What makes me happy is that people seem to like most sets to some extent; almost everything got a vote, so it seems that each set was appreciated by someone.

Anyway, two new polls are up for the month; one asks how you feel about female voice acting in adult content… for no particular reason. The top poll asks what you think are the three most important parts of an adult scene; please pick the three things you think are the most important in a good adult scene. (I am rather interested in the results of this poll.) In case you missed the note in the post I just made, I redid the anniversary set the way I did in part because RTL 4 was doing well in the poll at the time. I do really use these poll results and more votes are always appreciated. (As are comments.)

In other news, I hope to have an early Patreon preview of the first chapter of the upcoming city arc for my patrons within a week or so; and then I hope to have the chapter itself done around the end of the month. The preview for this month’s new mini-set and some new DA stuff will get worked in somewhere this month, not sure when yet. Other than that, I plan to be back sometime next week with a new post of some kind, either a status update and/or that RTL reflection/discussion I mentioned before. See you guys again soon!

Hi! It’s been a while and assorted wacky issues these past few days have kept me away/busy; (Internet might not even be fixed now, now sure yet) but I am back with the new anniversary set. Sorry for the slight delay and as voted last month; the set features Helenya… but also has a random elf in it for her to play with. A few hours after I posted that message last Saturday I realized that I did not like what I was making for the anniversary set; so I restarted it and made this instead, partly since people seem to like RTL 4 a lot according to the recent poll. There is a good amount of lesbian fun in here with some tail/pussy action. This came out really well in my opinion and I hope you all like it as much as I do. 🙂 I made a slideshow gallery of it this time as well to test that out a bit more; and the download link is after the break.

Remember, if you like my work and want to help support me and/or get access to more of my work, (Including my recent new simulation game) check out my Patreon page!