Hey. So below is the public early preview (patrons saw this early this week) for one part of one event in the game so far; the low level bondage training image is shown below. (This was also one of the events voted for in this month’s Patreon poll.) There will of course be assorted text with all of these events, but I chose to just post the plain image instead of an awkward screen cut so that you can see it better. The events in the game will scale in intensity and activity as Salune’s stats increase; starting at simple activities like this and eventually getting into decidedly rough territory in most cases. This is a tamer example, used mostly due to restrictions on what can be posted directly on Patreon.

As previously stated, each event will be a mini-set of sorts with narration, each split between the assorted levels for each training (I currently plan to have four levels of each and will probably just use 0-25, 26-50, 51-79, and 80+ to keep it simple); likely leaving low level events such as the one below with one scene image, and the highest level events per activity likely getting two or three. There will also be some other qualifiers for different event variants, including player choice and random chance, for example. The descriptions and explanations will also increase in intensity with the trainings; not least because I can write here without worrying about running out of screen space, as I do with the actual story sets. I am also planning to have some basic sound effects in this game, not just music like the previous micro VN. I am aiming for 4-5 events totally done before I send this out in a bit over a week, and I am on track to hit that goal. If people really like this, I can always come back later and add to the original events and/or add more/different events later; I have several ideas in this regard.

If any of this interests you, check out my Patreon page and consider supporting me; everything put forward helps support my work and helps me make more and better content. Starting with this month, whatever I have done toward this game will be sent out to my $15+ patrons, and the finished game itself will get sent out to $5+ patrons, whenever that may be. However, I have no plans to release this publicly; much like the micro VN from a few months back, this may just remain a Patreon only thing. Do also remember that the mini-sets reset at the start of next year, so you may want to get them before they are gone. (Over twenty minisets are currently available to my $15+ patrons, a couple are full size story sets.) https://www.patreon.com/redleatherart 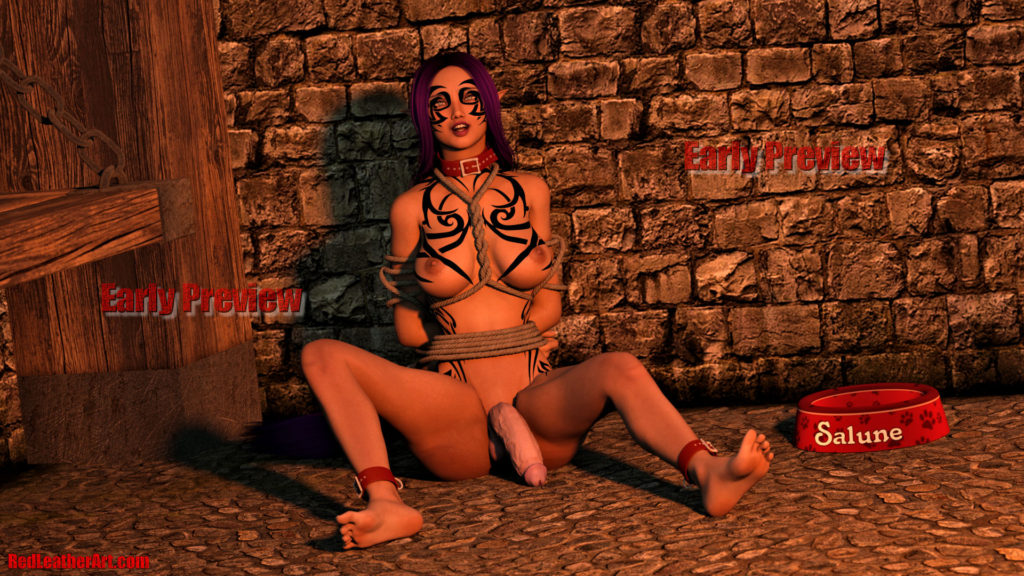 Hey again. I just posted the game event preview to my patrons, but it was a bit later than I had hoped. So the public preview will likely come at the end of this week sometime. However, for now I will give you all the longer and likely more informative written synopsis of the game. For those of you who remember, my original game idea was a slave training sim game featuring Zayla and Salune (as well as many random slaves/creatures of course). Way back before I had this site, when I first did this poll. people really wanted simulation type games; with assorted other options such as rpg games and VNs after that. Based on the poll on the right, things seem to have changed; but I still think people will enjoy this; if nothing else, people supposedly really like futa in 3D stuff… so there is definitely going to be plenty of that. (I will discuss the issue of game preferences early next month when the current polls are over.)

For those of you that either don’t know or don’t recall, the general idea of this game is to train Salune’s assorted stats as high as possible within a certain timeframe using a variety of events/trainings that cover a fairly wide assortment of things. Each training raises certain stats, but some training events are more powerful than others, and have negatives associated with them in addition to the positives (i.e. they don’t just add to stats, they reduce some as well) so care/restraint is needed to do well. Once the set time is up, the game gives you a score based on all your stats, and you might even get something extra if you do really well. The assorted events will have variations based on Salune’s stats and other factors (including random chance); though there won’t be as much as I would like of this in the initial version.

I cut some things for the base version simply to get it done reasonably quickly, but I can always expand on it later if people like it. I plan to have 20-ish events in the game for the initial version, with all sorts of additions possible. Each event is essentially a mini-set with some narration to go with it. My patrons already have an idea of what events this will include, though that list is by no means final. As noted before, my mid-level patrons will get whatever I have done starting next month as a very early beta of sorts; and I am hoping to get this finished before next year, but we will see how that goes. Once it is done, it will go to my basic patrons and up (though patrons above that would have earlier versions of it already); right now, I have no idea when or if it will get released free.

So look forward to that, and please vote in the polls if you haven’t already; the public event preview should come sometime late this week.

Hey. Sorry this is a bit later than I had hoped, but as you can probably guess from the title, I just posted some new renders to my DA page, and the free release of RTL 9, “Minion Benefits” is below, along with the original previews. Before that though, I did want to mention that I hope to have a preview of something game-related for my Patrons near the end of the week, which means there should be something posted here mid next week; along with a sizable post discussing assorted things about the game, much of which my patrons have already read. The polls still have some time left as well, so check those out if you haven’t yet.

So now for the part most of you are probably here for, the free release of RTL 9; the download link is below along with the original previews. (The password is still redleatherart) Remember to check out my Patreon page and consider supporting me if you like my work and you want to help me make more/better content and/or want access to it early (among other things)! Everything put forward helps. Also keep in mind what I posted earlier about the mini-set list being reset at the start of next year; so get in now if you want all the old mini-sets! https://www.patreon.com/redleatherart 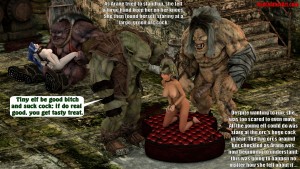 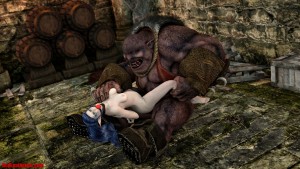 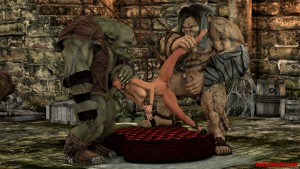 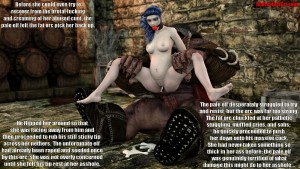 Hey. Sorry it has been a while since my last post, the last week has really been hard and I haven’t been able to get as much done as I would like. I am hoping to get the new DA stuff done over this weekend, but it may take a bit longer. If all goes well, I should have a scene preview of the game for my patrons late next week; and that should get posted here soon after. The polls here are going pretty well, but more votes are always good; and please remember that you can pick three options for both polls. I take these into consideration when planning stuff, and more votes help me know what people prefer and by how much.

However, below is the public preview of this month’s new Patreon mini-set, available for $15+ patrons on my Patreon page. The set features James and a slightly different Tabitha. She has her hair down and is her happier, cuddlier self in this mini-set due to her being away from others. This set takes place in the house Tabitha rented before they left for Lithorca; assorted fun occurs on her bed in what is currently six images. A quick word of warning as well, as previously mentioned I am restarting the mini-set list for my Patreon starting next year; so there are only three months left to get all these old mini-sets… currently all the ones I have done so far are available to appropriate patrons. Starting next January, I am restarting the cycle and giving away only perhaps 2-3 months back from then and any from then on until the next reset. So if you are interested in a fair bit of content of mine of assorted types that you likely haven’t seen yet, or you just want to help support my work; check out my Patreon page! https://www.patreon.com/redleatherart 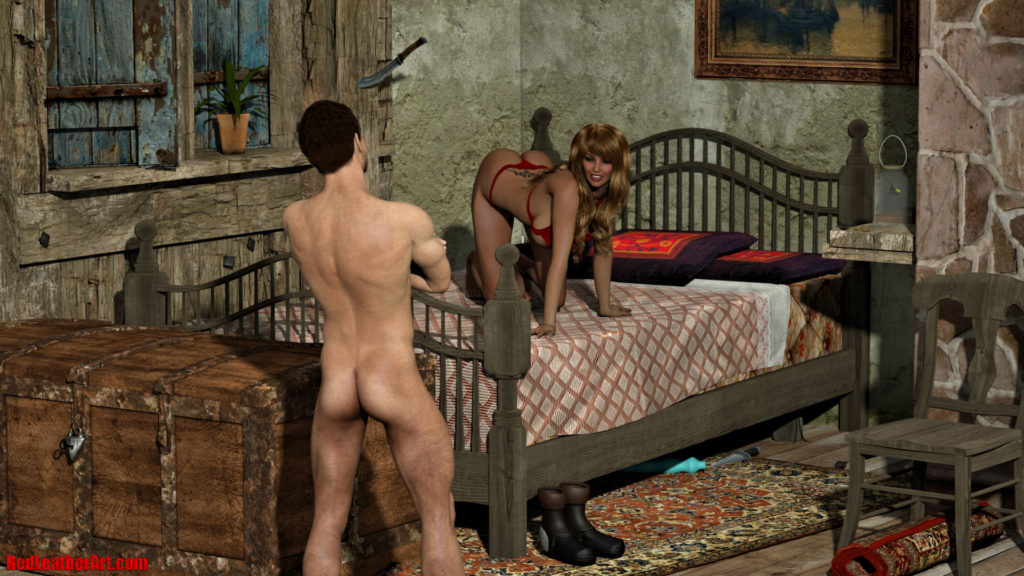 Hey again. As the title mentions, the results for last month’s polls are below and I have posted new/old polls! The two polls on the right are polls I had done already way, way back on my old google blog; so I am redoing them a year and a half or so later to see how things have changed. One poll asks which of my female characters are your favorite, and the other asks what type of adult games you prefer. (YOU CAN PICK THREE [3] CHOICES ON BOTH.) So vote in those polls and show me what you like!

The results for last month’s polls show that most voters seem to prefer quality over quantity, so I will keep that in mind. The other poll was rather obvious, but it seems most of you are interested in fantasy renders; with perhaps a little bit of sci-fi at times. This was what I expected since almost all of my work is fantasy themed, but I figured it was worth a shot. As mentioned previously, there will be new DA images, a preview of this month’s patreon mini-set, and a free release of RTL 9 sometime in the next two weeks or so. Other than that, there will be at least one post with preview(s?) of the game that I will be working on this month. I am not currently sure how much else will get posted here, but we will see.