Hey again. I am back with a surprise post of sorts – and my first commission of 2019! Here is a render commissioned by Potato of her OC in a fancy outdoors scene. (More proof that I can do modern themed stuff as well.) I think this came out really nice, and they seem to agree; so I am now posting it here for the rest of you to enjoy as well. 🙂

So as per always – if you think you might be interested in commissioning me to make a render of something that you really want to see, (either SFW or NSFW) then check out my commission info page, here – https://redleatherart.com/wp/?page_id=1370. There are also special slots/deals for commissions on my Patreon page if that interests you. 🙂 Feel free to ask if you are curious as to whether or not I can/will do a specific scene! (Or if you want an estimate.) 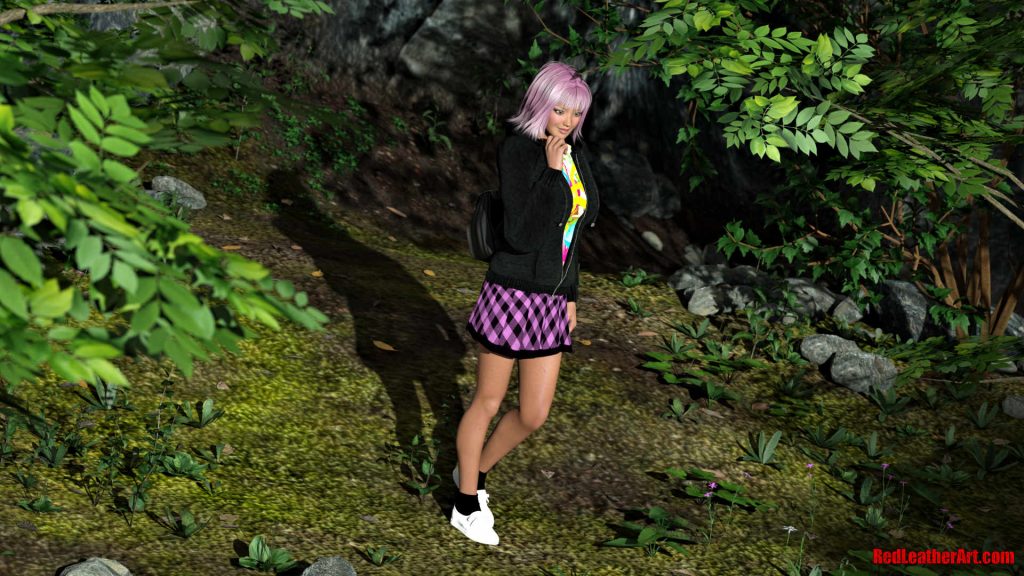 Hey everyone. I just wanted to pop in and give a quick status update. Everything so far is going according to plan; (the keywords there being – so far) so I still hope to have that other little thing done next week sometime… (which would get a preview here) assuming that I can get the voice work sorted by then. So it might go into the week after; I cannot say for sure just yet – as most of it does not depend on me, especially right now. (I have sent out the first scripts and I am currently waiting for the actual voice lines to get done.) I do still hope to have that and an update to SST ready before rewards go out early next month though; and so far that still seems to be on track.

So please vote in the polls on the right if you haven’t yet… and keep checking back to see what I can get done in the next two weeks or so – depending on how everything with the voice work turns out; and assuming that nothing goes horribly wrong… again.

Hi again! I am a little later than I was aiming for, but I am back with the sexy preview of this month’s new Patreon mini-set! As I have done a lot of hardcore stuff in these mini-sets recently, I decided to make this one more of a softcore/pinup style mini-set featuring Faye. (I do try to mix up/balance the characters as well as the style/content types in these mini-sets.) The story/setup for this is as follows: Faye takes a short trip outside Lithorca to gather some herbs and spring water for her potions – but she also brings along her sexy new swimsuit to test it out a little bit while relaxing in the spring afterwards. 🙂 This mini-set is mostly a glamour/pinup style set with one little masturbation image at the end – and is currently six images total; though that may go up a tiny bit later… as tends to happen. (I really tried to keep the size of this back where these are supposed to be after making last month’s mini-set about 20 images… and I will try to keep it from getting out of hand again for a while.) This mini-set also took a really long time to render, as it also uses full hard lighting like the last mini-set did… but I think it looks quite nice – I even got the water looking really good. 😀

As for what else is going on, I have confirmed the basic details with my new voice actresses – and I hope to have scripts ready for them in a couple days; and then get all that mostly sorted out within a week or two. (I have to make the scripts, and then cut/sort all the voice bits whenever I get them – so a fair bit of work there; presuming no retakes are needed.) After I send the scripts out, I am going to try to make one other little thing this month – as I will be far too busy/spent to do major work on the new game at the moment… but you guys will find out about that soon enough. (My patrons already know what I have in mind – hopefully that and my other main plan will work out for once.) Of course, I can’t update SST until I get the new voice bits cut and everything… so hopefully that will all get done in time for me to get that in before main rewards go out next month.

Anyway – if any kind/awesome people out there would like to help support me and/or my work on all sorts of cool new content; (like the new slave training game I have posted previews of recently) and/or perhaps even get access to several of these mini-sets and/or lots of other rewards too, like the larger versions of the completed animations I have made/posted and/or the full games I have also made (the micro VN and Salune’s Slave Training are still available via my Patreon page, and I hope to have a beta of this newer slave training game within a couple months; but things got pushed back a good bit when my previous voice actress backed out after making me wait for four months… which had already thrown me off a bit) – check out my Patreon page: https://www.patreon.com/redleatherart 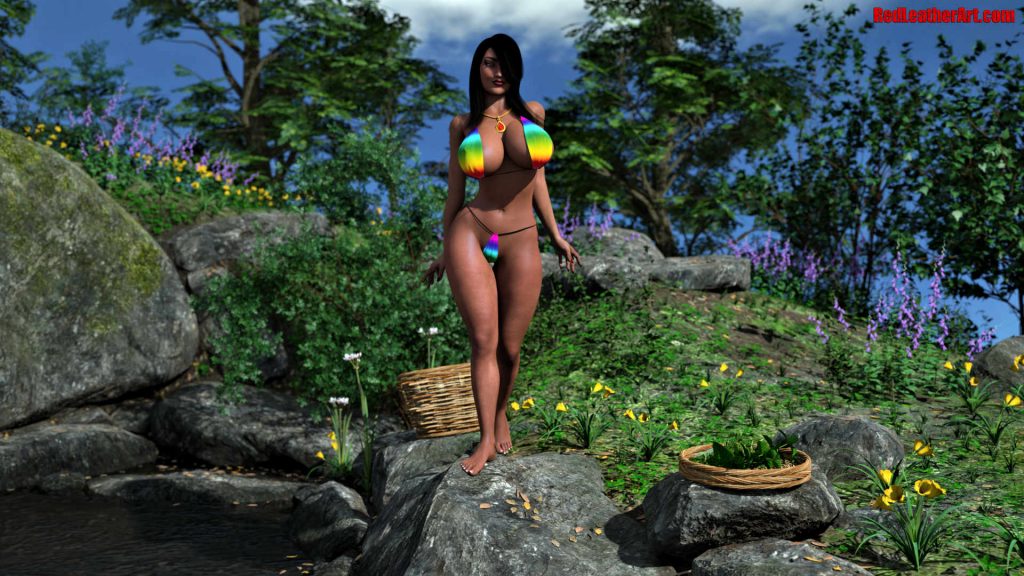 Hi again. Sorry that this is a fair bit later than I was planning, but things have been rather messy this past week or so; and not just because of the weather (a lot of snow here right now) – though that is definitely not helping. I just sent out Patreon rewards – including the significantly expanded mini-set from last month; which ended up being 21 images (including one x-ray alternate and two unused renders) – over double the original (almost triple)! I rather liked this one and had fun with it – (I may also revisit this scenario/concept in the future…) it was hard to stop it where I did; even if the advanced lighting made renders take twice as long as usual – hence the longer time to get all this done. I do really need to stop adding so much to these mini-sets… they are supposed to be 4-5 images and somehow end up being in the double digits fairly regularly now; that or I need to reset the mini-set list sooner than six months or something to balance out the extra content – we will see. This was probably also once of the most visually complex image sets that I have done so far (hard lighting, reflections, etc) – and I think it looks really nice. 😀

As things stand now, I am not sure what major work I will be able to put forward on the new game this month; I have a lot left to do to get the voice work all situated – even after the auditions end on Monday. (Finalizing stuff with the actresses, writing/checking the scripts, sending those and then waiting for the voice work to get done… and then I have to cut/label it all and actually implement a lot of it into my previous game.) So I will likely focus on that this month, while doing a bit of the event writing for the new game if I can; and try to work in the (relevant) new voice work into SST if it gets done (and I can cut/process all of it) relatively soon – as I would hope it would.

So I plan to be back late this week sometime (like Thursday or Friday at the earliest I would think) with the new mini-set preview for this month; and we will see what else happens between then and now… as I am working on a few other side things still. 🙂

Hey guys. I am back with the first post of the new year; I hope everyone had a nice time over the holiday(s). Just as a quick recap in case anyone missed my last post – the “World Info/Lore” page is now available up top with some additional information on assorted places/groups featured in my work. So definitely check that out if you are interested and have not done so already. 😀 In other news, I still have my various voice auditions to manage for another two weeks or so; but I hope to try and restart work on my new game this month – despite me likely having limited time to do much, given everything else that I already have to do. (Having my previous voice actress quit really threw a wrench in my plans, but I somehow got the auditions up quick and am set to have this fixed fairly soon… or at least have the actresses decided- I then of course have to actually write/order the actual voice bits.

Anyways – in regard to last month’s polls; there were three, though once again one got far more votes than the other two… I am not sure if this is simply because it was on top, or if someone stuffed it, or if people just felt strongly about it – but whatever. The top poll asked about breast size preferences… and “Realistic/Average” got a large chunk of votes – with “Large” in second place with around half as many… and then “Huge” after that with two, and assorted single votes for almost all the rest. Ironically, this was already somewhat my plan anyway; as two of the three new female characters I am waiting to introduce into the main story (this probably will not happen for a while – it is several chapters off for these two in particular) likely fit this description… well one for sure, the other may be more of a “Above Average” – I am not entirely sure. I will also consider this for the third girl who is not finalized yet… and we will see what happens. (Faye and this one not yet introduced character were supposed to represent the extremes in terms of breast size.) The second poll asked how you feel about established characters changing hairstyles, at least temporarily; and this was almost a complete four-way tie. The best I can take away from this is that most people seem to be fairly ok with it; as the “Stay the same” option was the one with one less vote – so I will consider this. The last poll got a disappointing amount of votes for whatever reason; but I thank those who did vote in it. (I kind of expected this… which is why it was just a fun poll and not a special one.) For this one, the top two answers were “A titjob from Zayla” and “A pussy creampie from Salune”… with one vote for “Giving Karen a creampie” – so it is clear what/who some people prefer. 🙂

As for the new polls, there are three – as per usual recently. (Please vote in all three.) The first one asks which of my main female characters so far is your favorite (for whatever reason), and please pick three. The second poll asks if you prefer animations with or without voice/sound. Finally, the third poll asks what you think of the new “World Info/Lore” page. 😀 Anyways, I will be back in a week or so with some sort of status update around the time I send out Patreon rewards – so I will talk to you again then!