Hey again. Quick update, but essentially I have had wicked migraines all week from the weather shifting so much; and today in particular was rather bad and I could get basically nothing done for the story set. I still think I can finish it before rewards go out in two weeks or so, so it should still all work out in the end; but I do not think that the previews will be ready before the end of this month. I do not want to rush things when that would either hurt me or compromise the quality of the story set; so previews will hopefully be posted late next week sometime. Sorry for the slight delay, but these things happen sometimes and I like to keep people in the loop rather than just going MIA for two weeks and reappearing.

I will likely be back early next week with new polls before coming back with the previews a bit later, so do vote in the current polls if you haven’t yet; and check back for those updates next week and happy early new year to all!

Hi again. So the new DA stuff is taking longer than I thought for a few reasons – including assorted render issues and my constant headaches from the weather going up and down 20 degrees every other day. Due to all that and more, earlier this week I started working on the main set for much of the time I have available and then taking like an hour at the end of the day to try and fix one of the DA renders and have that go overnight. I have one fixed for sure now… after having to replace the whole environment (which was having issues rendering properly); but I still have one more to fix and another to finish – if I even can get to that one. I will likely throw in a bit more time for those tomorrow if tonight’s attempt has something wrong with it – but I have at least one Xmas themed render ready… hopefully I will get the second one working within a day or so. (I would really prefer to get these done before Xmas and/or the weekend so people can see them at the appropriate time.) Sorry this is taking a while, but I really try to make the DA-specific images nice and a bit different from the stuff I usually make/post here.

I will likely just update this post when that happens, but I just came by to let you all know that I am working on both the DA stuff and the story set… just there is still work to do for both. In the mean time, the polls could use more votes and happy early holidays!

EDIT 12/23: New DA images are up – including two new Xmas themed images; check them out if you haven’t already! I plan to take the next two days off to relax and recharge a bit, but I wish all of you a merry Xmas and I will be back with a status update sometime next week. 🙂

Hey there. Sorry this is a bit later than I would have liked, but I hit a wall with the new DA stuff and switched to the mini-set for a while in hopes that I would think of a way around those other issues. (I wanted to post this last night but I saw a clipping issue in the preview and had to re-render it last night.) Long story short, two of the new DA images are still a work in progress for different reasons, but I am basically done with the new mini-set for this month; the topic of which was voted on by my mid level patrons! (Sort of… the vote tied so I picked one of the two winners.) I decided against the modern themed set, as I think that would be better served as a mini-story set and/or held off until more people are interested in it; which is to say I went with the (hopefully more appealing) fantasy option.

So the preview is below and the theme/pitch for this one was Helenya pretending to get trapped in order to entice some of Zayla’s minions to fuck her. (She needs to find ways to keep it interesting/exciting; since she fucks them literally every day and some grow hesitant to do her again.) As shown in the preview, Helenya has transmuted some rubble together with magic and appears to be stuck in an extremely compromising position – and her fake cries for help have attracted the attention she was hoping for; which leads to her getting banged fairly hard… just like she planned/wanted. It was as much fun to do as I was hoping it would be; and I really had to try hard to stop it at seven images. (It may actually be eight, I’m not totally sure – a couple renders are not finished yet as I am back to working on the new DA stuff; I will come back and render those a bit later – but as usual the total may go up anyway as I have a bad habit of adding things, as most of you know well.) I still plan to get the DA images done within a few days – so I will be back with a status update whenever that happens.

So as always, if you would like to support me and/or my work here; and maybe even get access to these mini-sets and/or lots of other rewards too, like the larger versions of the animations I have made/posted and/or the full games I have also made – check out my Patreon page: https://www.patreon.com/redleatherart 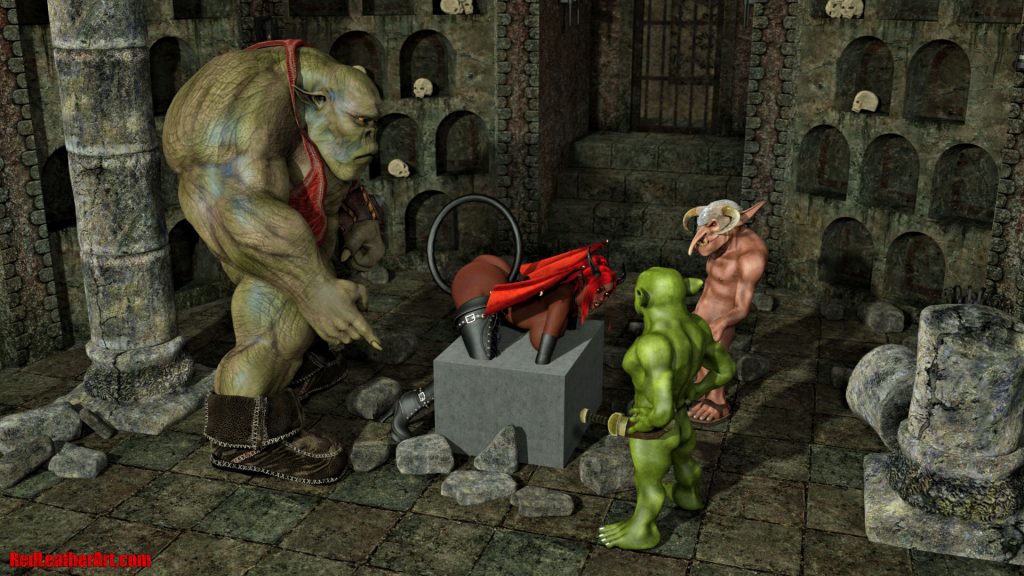 Hi again. So long story short, I am a bit behind where I hoped to be due to me losing all my usual spare time last Saturday and having a rough few days after that. I sent out this month’s Patreon rewards two days ago and the Patreon mini-set poll is also now over. I won’t say what won quite yet because it was a tie between two options, and I am too out of it right now to choose one – I will do that a bit later. (I will say that the options that tied were the modern option and one of the more interesting fantasy options – so it should be unique either way.)

I am still in the middle of rendering the new DA stuff, and things are going well enough, just slower than I had hoped. The plan is still to have all this and the mini-set preview posted before the start of next week or so; and I am going to try and stick with that if possible. (It may go over a few days, but whatever – I also plan to stick to one scene in the story set, so it should be ok.) The polls are going well enough; but more votes is always good, so keep voting and check out all my preview galleries and/or free older story sets linked in the tabs up top if you haven’t yet! I will be back in a few days with something – either the new DA stuff and/or the mini-set preview.

Hey. I hope you all liked that new animation and I am back as I said with the last poll results and two more polls! Last time in the one poll, people seemed to really like the galleries overall, so I will keep doing those. The other poll was a bit more scattered; but it seems like some people do project themselves into adult content if they like it enough – but some also never do. So that is a bit more vague; but still good to know, and thanks to all who voted in those. I have two new polls up now on the right; one asks how you feel about holiday themed adult content, and the other asks how much attention you pay to male characters in adult content – as opposed to female characters. I am of course very interested to see how these go and while one might have more immediate results than the other, I do use these poll results to help me decide things in the future; so please vote in these and let me know your thoughts!

Other than that, I am hoping to get the new DA images done later this week, then do the mini-set for this month next week (after the poll for that gets sent to most of my patrons ends, that will get sent out in a few days)[EDIT: the patreon mini-set poll is up now, available to my mid level patrons though next monday]; and then after all that is done, work on the next story chapter for LITC.

Hi again. Sorry this is a day or so later than I had hoped, but good news; I made a new animation featuring Lucia and a tentacle! I was planning to post this last night and I was just about to do so when I looked closely at a tiny error that I was already aware of, which made me notice a much larger mistake that I just had to fix. (There is a lot more to consider when making animations, as opposed to still images.)

So after the break below is the public gif of this new animation, and as usual, mid tier patrons of mine will get the full size mp4 of this; so check out my Patreon page if that interests you and/or you would like to support me and help me make more content! (https://www.patreon.com/redleatherart) I quite like this animation; and I had planned to do one of Lucia for a long time but I just did not get around to it until now. (The game ate up most of my time earlier this year in terms of content/work.) I do hope to do more assorted animations in the coming months; and of course any comments/support would greatly help with that. (I like to think that I am getting better at these animations.)

Other than this, I will be back in a day or two with new polls and the results from the current polls; and I have all sorts of stuff planned for later this month; (including a special patron-only poll to decide the mini-set) so check back soon!