Hi again. Sorry this is a few days late but I managed to fix one image I was about to give up on last Saturday and needed a day to fix it after that. I really wanted to get it done for DA this month, and I think it was worth the wait, go check it out if you haven’t yet. (Mermaid!) Allegedly people really wanted to see these according to a poll a while back, I did say I was working on it; and here is the current iteration of it. There may be more… detailed stuff with her a bit later. (Or sooner if a lot of people really like it,) Some other cool new stuff is also up on DA for everyone, so check that out and let me know what you think.

As for the game, everything is still set for a 1.0 release candidate early next month; it will remain in beta for a month for testing/balance purposes, and then leave beta the month after that. (And therefore go to normal patrons as well.) I have fixed some issues here and there and worked in a few new text variations as well as putting in a few more sound effects in some places. I am still looking into that one new convenience mechanic I would like to work in, but that may or may not happen; but it is far from critical. I am also fighting itches to put in additional scene images… which for now I have not. (I have to draw the line somewhere.)

I will be back around the weekend with new polls; so vote in the current ones if you haven’t yet.

Hey, sorry this is so late this week, but I have had all sorts of crap delaying me these past few days. (I had a gas leak fixed two days ago and it literally took them eight hours to fix; plus the day before and after I had to move half my back room around so they could get to it.) Long story short, below is the preview for this month’s new patreon mini-set, and it features Tabitha accidentally waking up an ancient slumbering demon while checking out a crypt; and he has a century worth of pent up lust that needs venting… which likely won’t go so well for her. The mini-set is currently five images, though that may go up as usual; last month’s mini-set ended up at over ten images, so anything is possible. Check the tags on this post for a better idea of what will happen in this set.

In other news, the polls are going fairly well, but more votes are always nice; and I am adding bits to the game for the full release early next month. We will see how much more text/variations actually gets added and what it all comes together, but so far so good except the one little additional mechanic I want to add in if possible. (Ton of issues with that, but I am working on it.) The new DA stuff will get posted next week sometime; as noted I have had a busy week and did not have time to finish all that this week.There are also assorted things planned for next month, most of which is known to my patrons already; but it will all become public soon enough. (One thing in particular I am still on the fence about.)

Finally, if you want to support me and my assorted works and maybe even get access to these mini-sets and/or lots of other rewards too, (including the current game beta) check out my Patreon page: https://www.patreon.com/redleatherart 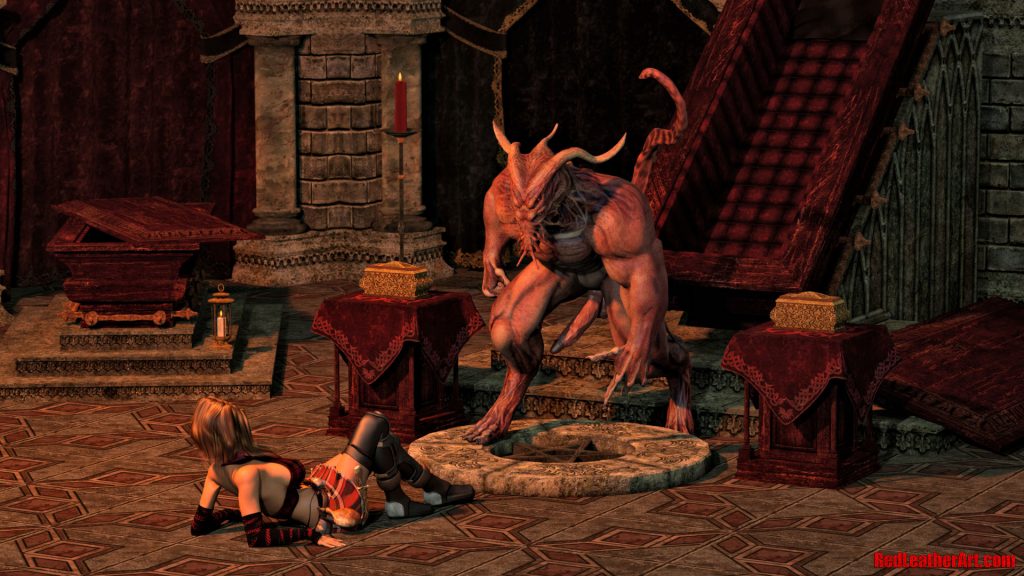 Hi. As you can guess from the title, the game is not quite done yet; but it is very close. I am taking another month to expand on the text in a few areas a bit, do some balancing, and possibly work in one more small thing. All the base scene content is in the current beta though, which means all scene sets/training options are in and the endings are in as well; and that was sent out to my Patrons last night in the 0.86 beta. As mentioned previously, I can’t see this not being done before a month from now unless something terrible happens again and I am prevented from working somehow.

I think it all came together better than I had hoped, and likely better than it should have given that this is my first real attempt at a game. There are a few things I had to tone back a bit, either because of render limitations or just to try and balance the content; I prefer not to have one scene set be twice as large as another unless there is a good reason. However, as I mentioned various places a while back; I can always add to this later on if people really like it – I already have several ideas for this, but it completely depends on the reception this gets and/or what support I have to do it. (Check out my Patreon page if you want access to the current beta – https://www.patreon.com/redleatherart)

Anyway, more votes in the polls would be appreciated, and I will be back in a week or so with a new mini-set preview and hopefully some new DA stuff as well.

Hi again. I am back with the results from the old polls and two new polls are up on the right. The first poll from last month asked if you are excited for my upcoming game, and thankfully most voters are. 😀 The second poll asked if you still view story/image sets if they don’t have your favorite character/content type; and this was a tie between always and sometimes, so the general consensus seems to be mostly yes. (I was quite interested in this second poll, and it seems that most of you are at least willing to look at new/other things, which is good.)

As for the new polls, the first one asks if you would be interested in a general lore/world info page if I made one; think something like the characters page except with background info/ additional context. The other poll asks how often you check this site, with assorted options. (I assume people would check here rather than my other pages.) Please vote in those new polls and let me know your thoughts on these things!

In other news, I am working to try and “finish” the content for the game for next week; though it is apparent I will not have time to fully test the balancing at the minimum. I am still unsure if I will even be able to squeeze in everything I want to before Patreon rewards sometime next week, but I am trying. It is remarkably hard to decide what to cut and what to expand on. I will be back with an update next week regarding whether or not I managed to get the game content “finished” or if I have to push it back one more month for some additional polish.