Hi again, it’s finally the time that most of you have likely been waiting for; the free release of RTL chapter six! As depicted in the previews, the set features Tabitha, Salune, and some tentacles. The original previews are below for convenience, as well as the download link. (The password is still redleatherart) Remember to check out my Patreon page and consider supporting me if you like my work and/or want access to it early (among other things)! https://www.patreon.com/redleatherart

Also, new stuff is up on my DA page; three images of which are totally new and quite nice. 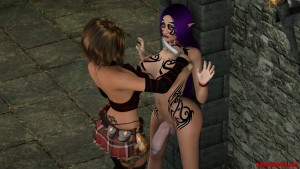 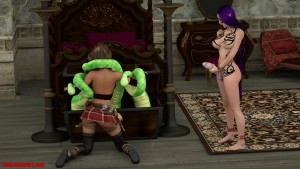 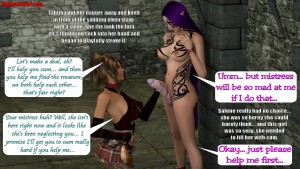 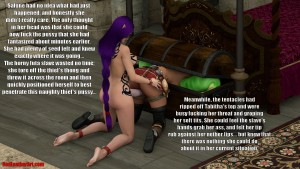 Hey. This month’s Patreon mini-set is done and it features Karen and one of her higher paying female clients (and friend), so expect some fun and playful lesbian stuff. (Karen hasn’t gotten any screen time in RTL so I figured she needed another mini-set at least; I think Lucia has had two since RTL started as well.) This preview also showcases some fancier items from my library as well as a working mirror, which I had been prohibited from using before this new machine due to the horrible render slowdowns it caused. A preview image is below, and it and the other five images (so six total right now; but again that may go up) will be sent out to my $15+ patreon patrons after payments clear next month. Side note, I hope to get the DA content done around the end of the week; a bit later than I had hoped but whatever. That other thing I mentioned at the beginning of the month will likely happen later this week too; just a heads up for those of you that read this far into the paragraphs here. As usual, if you like this preview image and want to get access to these Patreon mini-sets, and/or early access to my regular main story sets, maybe even other assorted bonuses, or perhaps you just want to support my work and help me make more and/or better content, check out my Patreon page! Anything and/or everything donated really helps! My Patreon page has just been updated to the new version as well! 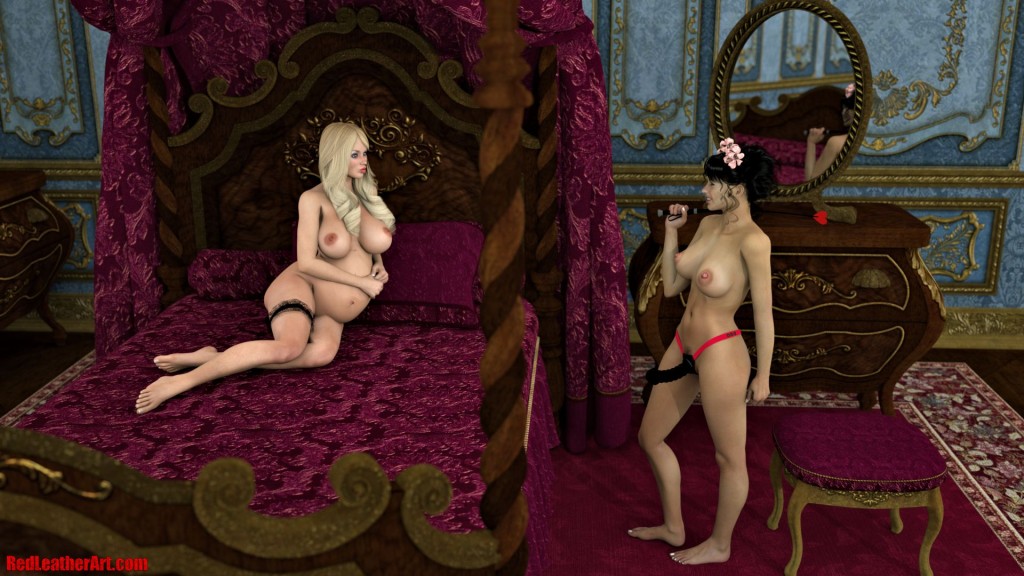 Hi again. The basic walking animation for the month is done, a preview gif is below as before. This animation features Salune walking in a short looping gif. Though not as involved as the previous animation due to there being less items to animate, I think this one turned out better overall due to me having more of an idea of what to do this time around. (I think both the video file and the gif are smoother this time around; there is a slight stutter at the end of the video file again but I think it is from the quick repeat looping when playing it as the stutter disappears in the gif made from that file.)

Unfortunately, the gif maker tool that I use has been neutered somewhat since the last time I used it and I can’t easily make HQ gifs with it currently. I either need something to crop the video file that I use to make the gif or find a new tool to make the gifs with; unfortunately cropping videos in Videostudio X7 is a complete mess that I have yet to fully understand and I know of no other easy to use video to gif converters at this time. I hope to get that figured out by the end of the month to get a HQ gif made for my $15+ patrons, but even if I can’t the original HQ video file included anyway so it shouldn’t make too big a difference. Anyway, here it is; comments and/or feedback welcome.

Hey. As the title says, rewards for my paying patrons for last month have been sent out. On that topic, I did update the preview images in the earlier post for RTL 8 but waited to mention in it hopes that I would have the first animation done by now. (No huge differences, but still worth mentioning I thought.) However, due mostly to assorted real life stuff that needed done the past few days it is not done yet; so I will just mention the details of the final/updated RTL 8 and some other little things. I did not give a final count in the original post, as I thought that I was going to try and fix it still. (I have since updated that post to include the final total as well.) Little did I know how much I was going to end up fixing; but that just means more images again. The final set is 42 images, each with a clean and story version as usual.

In other news, I did fiddle around with some of the higher end content that I have for poser on my new machine and so far, things look pretty good. I have re-planned the next story set to attempt to include some higher quality content that my old machine could not handle; we will see how that works out next month. In any case, more votes in the polls would be appreciated and I hope to have this animation done by the end of this week.

Hey again. So the old polls are done and two new polls are up now! One polls asks how you feel about established characters changing outfits. The second poll asks if I should take a break from main story arcs after RTL is done (likely in about 3-5 more sets) and make some random other image and/or story sets instead, work on a game, attempt some complex animation, or if I should just start the next story arc. My patrons have seen the special patreon early previews from a while back for two of the upcoming characters in the next story arc, (there will be others though) so they may have some better insight here but it is hard to say. Also, for those of you that actually read this far into the paragraphs here, RTL 6 is also scheduled for a free release this month sometime; I am not going to say when exactly so just keep checking back for that. There will likely be another Patreon-exclusive poll in the coming months, possibly relating to what to do when RTL is done. I have no idea when exactly this will be yet. As for the results from the last polls, people clearly want me to do the two month plan; and most people seem to prefer story sets and animations, which is fine. Games were only two votes behind animations though, and likely in April I will try to get on that in some way. I have too much to try and finish this month to do a game right now. However, as noted last month, I have been looking into this and working on ironing out problems that I had way back whenever.

Speaking of that, my plans for this month are as follows:

Unless there is some other insane weather catastrophe or some other horrific incident that stalls my work somehow (again), I think I should be able to get most of this done this month, if not all of it. The first two items are the basic stuff that I need to do this month and the most important items. I think it has been a few months since I have posted new stuff on DA so I really need to do that after I take care of this month’s base content. The second item says “at least one” animation because I plan to make another simple walking animation, but possibly another, more complex one if the first doesn’t take too long and/or if I finish the contest winner images early. The reason that item number four is up there is that for whatever reason, Patreon is now changing the layout of creator pages; which means that I need to redo some stuff and make a new header image for my Patreon page. Allegedly this new layout goes live at the start of March whether you are ready for it (or even want it) or not, so I should probably just set it all up now and let it activate early. After that is the contest entry images, which will vary in difficulty. The main issue for the month is that I am not sure how long the 10-ish image set for the top contest entry will take, and that will likely be the sticking point here.

The few images for second place and one for third should be rather straightforward, but the first place entry is a bit more involved and should have water in it; which I have been relatively unsuccessful at rendering properly in Octane so far. (Theoretically I know what to set it to, but when I do that it doesn’t look right and either looks really fake or like an oil puddle; hopefully I just have to fiddle around with it some more to get it looking right.) The plan for these is to post all the contest entry images together as one post, so even if the first place entry goes into early next month I will wait to post the others until it is done. I also plan to ask the people who made the entries for basic feedback regarding the images I make before I post them, but I am not going to wait for a response if they do not get back to me in a week or so. (I also make no promises to act upon said feedback, but I likely will if it is reasonable and/or simple to fix.) These contest-related images will all be free for everyone, so that should be nice. In the mean time, check out the new polls and check back for some new content soon-ish.