Hey again. The patreon mini-set for the month is done and it is eight images this time! The set features a restrained Salune being used by Zayla’s pet minotaur. The tags should give a fair idea of what is in the images of this mini-set and one preview image is below. It will go out to appropriate patrons next month after payments clear. I had some real issues rendering this one for some reason, but I finally got it done. The DA stuff I am still working on, and that will likely take another day or two. My first octane animation attempt will come after that. The polls are going better than usual, so keep that going. 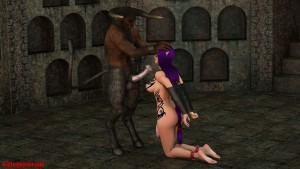 EDIT 11/19: So I made two or three images for DA, but only one of them rendered without problems. I have no idea why things are having issues all of a sudden; (the mini-set had issues as well) since there should not be enough stuff in these scenes to cause memory problems as far as I can tell, but right now it just doesn’t want to work right (at any acceptable speed and/or without memory problems) for some reason. I left the final renders undone until this morning because I didn’t think getting these to render would be such a problem; (I was hoping the mini-set issue was just something in the scene) I thought that I could just render them, do quick postwork and then post them but apparently not. This might take into tomorrow if I can’t get this working in the next hour or so.

RE-EDIT: Over two hours later, I finally got the other two images for DA working. I just do not have the energy to take the additional hour to post them to DA and then into all the assorted groups I use on DA; I will post it all tomorrow. I also plan to post one or two softcore but new preview image(s) for RTL 7 on DA tomorrow as well.