Hi again. Sorry for the long gap in posts here – but I have been pretty busy with all sorts of shit. Long story semi-short; the renders for LITC 6 are done, but I have not had the time/energy to finish the writing/compilation yet – so hopefully I can get that done next month. I did finish the Nylavi/elf guys mini-set though, and sent that out yesterday; that ended up at 49 images total – and patrons also got the second preview early, as per usual. I did also go ahead and post the second preview for March’s mini-set publicly as well – that is over in the post for that, as well as up in the master catalog, for those interested. [EDIT: Second preview of this one is now below and on the master catalog as well! ]

As for this new mini-set that I am posting a new preview of now, it is a continuation of a fairly old mini-set I did years back (#46 – which was almost three years ago by this point); and it stars Salune, as well as a side character that I have revisited a few times now – a curvy brown-skinned elf with tattoos… who is just one of Zayla’s hundreds of nameless slaves. (I might give her a proper name later, but right now I think her semi-anonymous nature is one of her draws.) However, she also happens to be a favorite playmate of Salune – which is what led to this mini-set… and it is a direct result/continuation of their prior couplings. (And will surely lead to many more.)

However, this setup is a bit long, so I am putting the rest of this post behind a “read more” tag… but I think most of your will want to check it out – so be sure to click below! 😀

For those who prefer a bit more of a written setup, here that is: A few months after their various unapproved nighttime couplings, the belly of Salune’s favorite playmate started to grow – as happened to all of Zayla’s female slaves. (Most all the female elves were purposely bred by/with Salune – in hopes of making more futas.) However – the case of the brown-skinned elf was somewhat unusual, because according to Zayla’s magical scrying, she was carrying not one, not two… but three of Salune’s babies inside her! Multiple children in one pregnancy for normal elves was quite rare – especially without any magical or alchemical assistance, as was the case here… but it just showed how compatible the two of them were. (Zayla had caught the two of them fucking without permission several times – and both were willing to brave possible punishment to be together; which was also quite rare – and somewhat insulting… even if it was quite cute.) The tattooed brown elf already had a fairly motherly body as well – with good curves, full breasts, and nice wide birthing hips; all of which were sure to become even more mature rather soon. The triplets inside her also made that brown elf Zayla’s second most valuable female slave for a time… second only to Salune herself.

The problem now was that Salune was often rough with her toys and playmates – not out of malice, but just out of her uncontrollable lust; she could fuck harder and longer than any normal elf could – it often left girls dangerously exhausted. This was a huge risk in the case of the brown-skinned elf, as her dark elf owner did not want to risk the lives of her babies by letting Salune “play” with her unsupervised; preferably until she gave birth… but at least until the last month or so of her pregnancy. So, Zayla forbade Salune from fucking the brown-skinned elf until further notice – all her prize futa slave was allowed to do was let her brown-skinned playmate suck her fat cock through the bars of her cell. This was enough for them for a while – and Salune was allowed to feed her friend plenty of “milk”, to help their children grow. However – some of Zayla’s more monstrous minions caught on to this, and tried to get free service from the pregnant brown elf too; which did not go over well. Zayla caught some goblins trying to force themselves on the brown elf – and while she did manage to stop them, (by lighting two goblins on fire) the slave owner saw no other fix but to move the heavily pregnant elf somewhere else. Zayla put the brown-skinned elf in the distant holding cells, at the other end of her lair – a place her normal minions could not access… and neither could Salune.

While Zayla did bring the pregnant elf food and water each day, cuddled with her sometimes, and even provided her with a real bed, a chair, and other things that would be considered luxuries by her less valuable slaves – the brown elf seemed to be getting more and more depressed at being left alone. When asked why, the brown elf said she wanted to see Salune again – and have sex with her; as they had been apart for several months now… and she missed her so much. The pregnant brown elf was already quite lewd by nature – and had been denied real, proper sex for about seven months by this point, it was like torture to a lusty woman like her. Plus, she did love Salune – both as a sex friend, and also as the “father” of her babies… so she really wanted to see the futa elf again. Normally Zayla did not care much for such things – as it was not the place of her slaves to make demands of her; but in the end, she figured that it was more risky to not let them be together – the dark elven mistress could not risk the health of several children by letting the mother get any more depressed… especially with the birth so near. So, with the brown-skinned elf expected to give birth any day now, Zayla finally brought Salune over to her cell, and let her in to see her – after explaining that they could have sex if she was gentle.

That night was packed full off rough, passionate action – but even their first minute together was quite telling. As soon as Zayla pushed Salune in the door of the cell – the futa elf ran towards her playmate as fast as she could, and the two elves were making out in under twenty seconds. Within forty seconds of reuniting, Salune’s cock was back where it belonged – stuffed deep inside the little brown elf’s pussy. And then finally, just before a minute had passed since their reunion – Salune had blown an impressive load all over their unborn children; and huge squirts of her cum then gushed out onto the floor, as the pregnant elf’s pussy simply couldn’t hold nearly that much cum in her current state. Zayla couldn’t help but smile a bit as she watched two of her prize slaves fuck with reckless abandon – and hoped that their kids inherited the raw lust and fertility of their moms. Unfortunately, the dark elf had other matters to deal with – and couldn’t stay to watch any more; so she left Salune alone with her favorite playmate, and the two of them fucked and cuddled for several hours. When Zayla returned the next morning, she found that Salune was now the “father” of three more beautiful baby girls; and she congratulated them both on their healthy offspring. However – Salune had many other sluts to breed that day, and so Zayla led her away for the time being… but she promised to let them fuck again very soon; as that little brown whore was apparently her best shot at getting more futa elves made. And sure enough, within two weeks of giving birth to her first three kids, the brown-skinned elf was pregnant again… and both her and Salune couldn’t be happier about it. 😀

You can check the tags on this post for an idea of what I plan to include in this mini-set, but that may be subject to change, as always. Whatever it ends up being, it will go out to appropriate patrons of mine starting with main rewards next month. I hope to finally also get the new story set done next month as well – but we will see what happens; the weather is being weird, and stuff has just kept coming up for the past two weeks. I am really quite surprised that I managed to get all that I did done this month – even if it wasn’t quite as much as I had hoped.

Otherwise, I know the side renders are super late by this point – (really sorry about that, but I do plan to do basically twice as many for this interval at this point…) and I hope/plan to get those done fairly early next month just to make sure it gets done; I may also even post a journal on my DA page to ask if there are any requests again… we will see what happens. I do still want and/or plan to update a few of my other pages… if/when I can find the time/energy for that. Not many votes in the polls here either – but that just seems to be how it is lately… which doesn’t help my motivation at all. I should be back in a few days with some new polls… or maybe just one, I dunno; it hardly seems to matter recently for some reason.

As I usually mention – if anyone out there would like to help support me and/or my work on all sorts of new content; and/or perhaps even get access to several of these mini-sets and/or lots of other rewards too, like the other finished story sets, and larger versions of the completed animations I have made/posted, and/or the full games I have also made. (The micro VN and Salune’s Slave Training are still available via my Patreon page; and I am doing what I can on the new game with whatever time I may be able to spare – if any…) Regardless, check out my updated Patreon page!: https://www.patreon.com/redleatherart 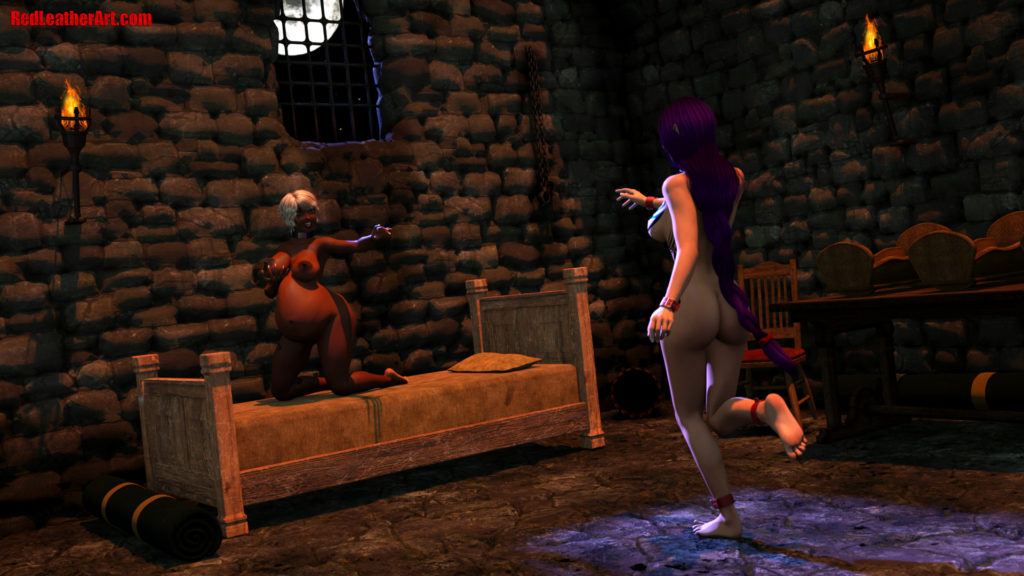 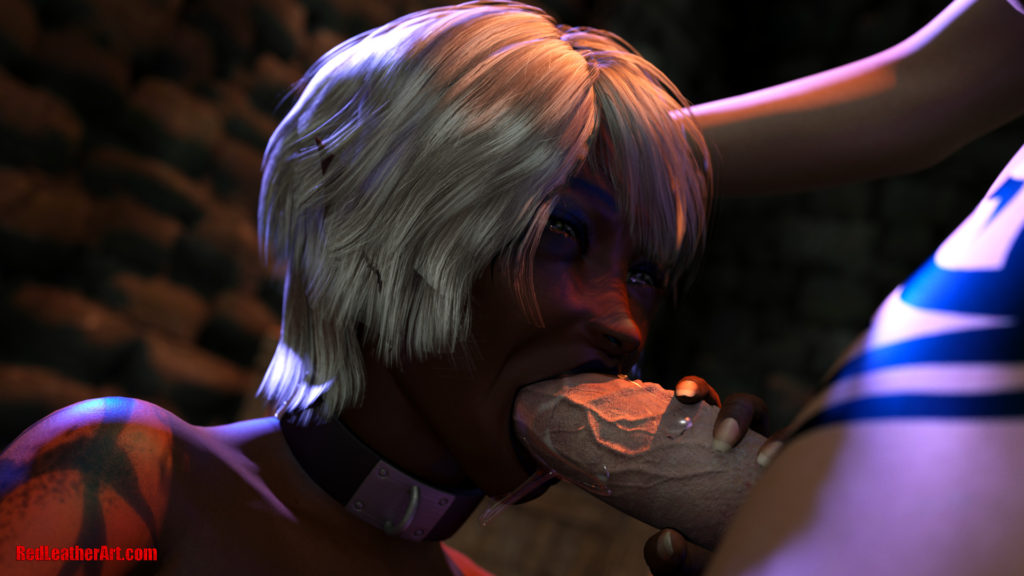