Hey again! This took much longer than I was hoping for… for all sorts of reasons; but long story short; I sort of fixed the mini-set. I did get it looking good, but I couldn’t quite get all that I wanted to in the sci-fi mini-set though – due to the limitations of my render machine… so I attempted to come up with something else (instead of the sci-fi one, at first) – which lead to my current predicament. Effectively, I have for the first time made a mini-set that is BOTH fantasy and sci-fi themed… and it might be either my best or worst mini-set ever depending on your tastes/preferences. This mini-set/story was supposed to just focus on the sci-fi aspect of this… and you never actually saw what was going on inside the machine/game – but thanks to me going all in with this in the visual department, now you do! I think this came out really well and I think/hope that people will be interested and/or really like it… but we will see what the response/reception to this is. (I am rather proud of how well the preview came out and how informative it is – despite it being a bit blunt/cheesy; since the preview for this is basically two in one.)

As far as what this is about… in the not so distant future, a young girl – Rebecca, volunteers and is chosen to help a famous technology company test their new “full immersion” virtual reality gaming system; and she gets far more than she ever bargained for during the test – in more ways than one! The new immersion system turns one of her favorite adult-themed massively multiplayer retro-fantasy games, “Whore Quest: Challenge of the Bitch Queens”, into a sexual playground – where everyone and everything wants to (and does) fuck her senseless; and she can feel it all as if it was really happening. (Her consciousness is effectively transferred into the game – and therefore, all her senses with it.) The scientist in charge has locked her inside the game… and drained her stats, but made her immortal – which left her at the mercy of pretty much everything in there; which seems harsh, but it was necessary in order to fully test her new system – plus, Rebecca did technically agree to it when she signed the contract for the test. Poor Rebecca hasn’t even considered what may be happening to her real body while she has been in there (which is a long list) –  as Rebecca’s character has gone though much worse inside the game… and who knows what else may be in store for her. 😀 (Important life lesson – always read the fine print and never sign anything unless you do.)

The mini-set itself is not finished yet due to the assorted delays/issues, so I have no idea how big it will be; what I have so far is honestly more than what these are supposed to be in the first place… (4-6 images) but I tend to just keep adding things to these and go overboard every time, so it will likely be over a dozen images or so. (The last few have been around 20, but this is already a lot more detailed/involved than I usually do in mini-sets due to the extended time/effort put in.) Whatever this ends up being, it will go out to appropriate patrons of mine in about two weeks or so. This was a lot of work, (basically two mini-sets… and I spent much longer on it than normal due to the issues) but it was also pretty fun to do… and hopefully people will enjoy it. 🙂

As for the short story bit – again, I had to redo much of it since I had not originally addressed the internal bits of the game in the initial story, and much of what I had originally planned was not possible due to my limited render machine… but due to me redoing/adding to the mini-set itself, I also went ahead and added to the short story as well to better reflect what the mini-set is now – and it is not so short anymore, at least currently. (I basically wrote another short story to put in the middle of the original one – and also cut out a bit of the original story; and I am now trying to better weave them together.) However, I have had assorted real life things to deal with these past few days (in addition to the general issues making this mini-set) – including a lengthy doctor appointment earlier today that went way over what was scheduled, so I lost a lot of time that I had planned to use for editing today. Long story short, I need a little more time to fine tune (and maybe cut a bit of) the ‘short’ story for this – it should be posted sometime tomorrow. (I plan to update this post when it is ready. EDIT: It is done, but I made a new post for it, here: https://redleatherart.com/wp/?p=2552) Sorry for the slight delay here – but as you can probably tell by the preview/description… I think/hope that this should be worth it. 🙂 (Apology to the handful of people that subscribe to posts here via email and whoever reads this before I post the story – but I see no way around this; I am just too out of it to properly finish/check this right now and I want this to be as good as the preview.)

Anyway, below is the preview image for the mini-set; which I am quite pleased with for all sorts of reasons – I feel it does a good job at showing both aspects of what is going on. (People tend not to like my ‘establishing shot’ previews for these mini-sets, so I went with one that was from the end instead this time.) I am not even entirely certain what this will or won’t include in the images yet – as it is not finished and basically two mini-sets in one… and there are many options available – (especially in the fantasy department) but there will be some of both aspects. Obviously, and as before – not everything in the short story will be visually represented in the mini-set. (The tags on this post are what is visually represented in the mini-set as of right now and will likely get updated later.) As far as other stuff, I will be back in a couple days with new polls and to go over the current poll results.

As I usually end these with, if any kind/awesome people out there would like to help support me and/or my work on all sorts of cool new content; (like the new slave training game I have posted previews of a couple months back) and/or perhaps even get access to several of these mini-sets and/or lots of other rewards too, like the larger versions of the completed animations I have made/posted and/or the full games I have also made (the micro VN and Salune’s Slave Training are still available via my Patreon page, I am now restarting work on my upcoming game once more now that I think this whole mess with my surgery is over… and I hope to have a beta of this newer slave training game within a couple months; but we will see what happens) – anyways, check out my Patreon page!: https://www.patreon.com/redleatherart 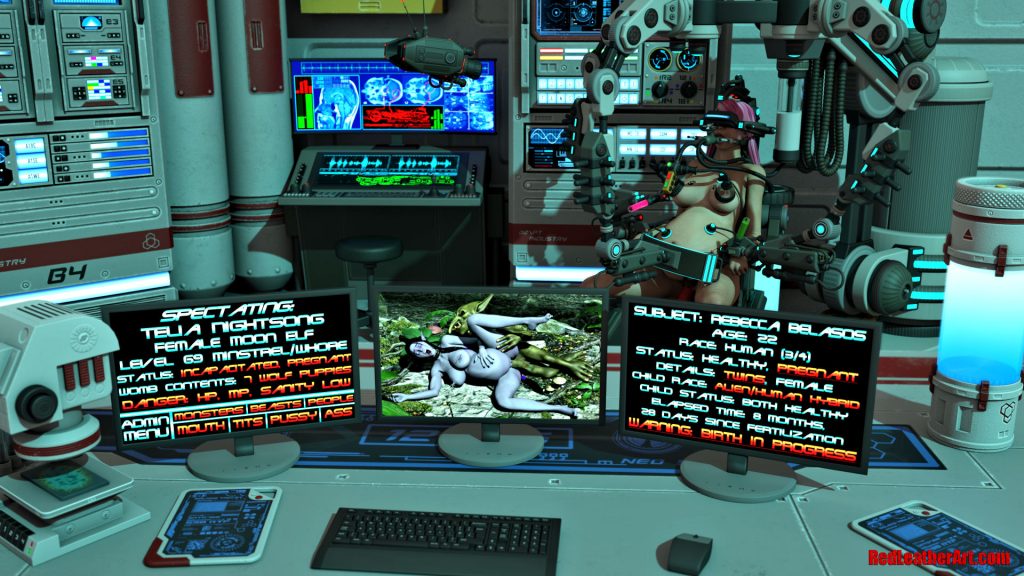