Hey! Sorry these came a bit later than I had hoped; but in a way I don’t think that is all that surprising at this point. (I had some very strange render issues that I absolutely had to fix.) I have posted the previews for LITC chapter four below, and as you can guess from the title and the images, it involves Helenya having her way with a captured Matt. Helenya returns to her temporary hideout with her newest acquisition (the pregnant half-elf from the last two chapters) only to find all of her other kidnapped sluts missing, and an unconscious man (Matt) on the ground. The succubus is understandably very angry; and decides to interrogate her only suspect in this “crime” using her vast array of sexual skills. Even if Helenya cannot get any useful information out of him, perhaps she can use him to vent her frustrations a bit… as well as get some more lust energy. Matt is weak and vastly outclassed in terms of sexual skill… but can he endure the demon’s assorted “tortures”? Will Matt tell her who took her would-be slaves? Does he even know? Only one way to find out…

There is a lot of femdom and non-con fun in here – and at least one of them is greatly enjoying it. (Perhaps too much.) The story set is not quite finished, but is in the mid-thirties in terms of total image number… though that will likely go up a bit. (I will update this post later with the final count once I have it.) [EDIT: The story set ended up a total of 61 images… each with a clean and story version – don’t ask how this happened.] There is a fair bit of stuff in here that is currently without a proper tag as well… which I might have to add in.

So while I finish this up, vote in the polls on right if you haven’t already, and also check out the demo for “Salune’s slave training” if you haven’t yet for some reason! (Download link is up in the game preview gallery as well as a few posts back.) Side note, I plan to add some more voice bits to the game later this month… after this story set gets situated and send out Patreon rewards – hopefully early next week.

The four public previews are below; two clean and two story as usual. (Text may yet change a bit due to me still finishing the last quarter of it – I may need to shift things around if the set expands.) If any of this (or my other work) interests you, or if you just want to help support me, please check my Patreon page! 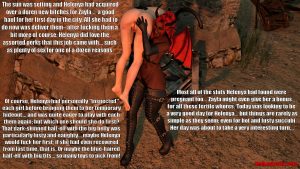 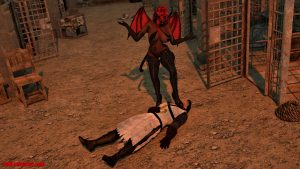 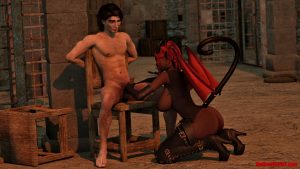 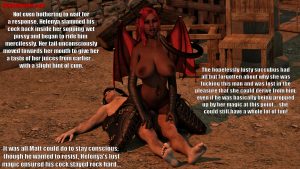