Hi again. I am back and I have decided to post some more info/public previews of the game beta I sent out to my mid level patrons a few days ago! Below are FOUR previews, including a screen cut of the previous one from in game. As mentioned before, the game is called “Salune’s slave training” and the goal is to get Salune’s assorted stats as high as possible within a month (maybe more) by picking assorted training activities and even making choices inside those activities; as shown a bit below! Currently, only four activities are implemented; and they may still be expanded or redone slightly, but apparently my patrons really like this so far. I am going to work on it as I can and I hope to get it done mid-spring or so next year, but I will update the beta given to my mid level patrons as I go along. (I hope to have at least one new event put in for next month, but I want to do animations for the general content this month and those are messy.) If you want to check this out and/or help support my work/making this, check out my Patreon page: https://www.patreon.com/redleatherart

The first screen is from the lowest level of bondage training, as mentioned before; however, things do get far more interesting as her skills increase. The second screen is just a cut of the menu that shows if you select “Oral training”, it gives you a choice of how you want to do that; as some events in the game will have things like this. The third image shows one variation of the oral training, and a choice within that choice, that shows alternate text and affects the stats gained/lost. (Obviously the stat increases/decreases with each event are just token right now; I have to balance that more when the game is almost complete.) Currently each scene level/variation has only one image associated; but there are/will be text variations and other choices to keep it interesting. Some events will have more options than others, but that is just the nature of these things; much of the text for the events currently in the game will likely be expanded later to match future events as well. (I kept it semi-basic for many events to try and not go overboard again; although that happened anyway.) I may even add more events/images after the base game is done; that is just one of many possibilities If people like this. My patrons also have the current planned event type list, though that is not final. The last preview image is just a cut from the second level scene from the “masturbation” training option; which was one of the options voted for by my patrons last month to be put in first. (It’s worth noting that I put in all three options that were voted for.) Also worth mentioning is that both this and the small VN I made before have a cg gallery, so you can see all the images you have already viewed without anything on top of them; and this is in the game already. I hope you all like these previews from the first beta of this game, and perhaps some of you will want to try it; which would be great. Either way, I will have a preview of something else new around the end of this week. The polls on the right also could really use more votes.

EDIT – 11/21: So to no one’s great surprise, I am a bit behind again due to constant interruptions and issues with long chains of renders for this one animation. I will give it another go tonight, but I may just have to do plan B again, we will see. 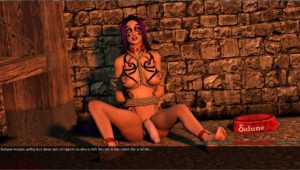 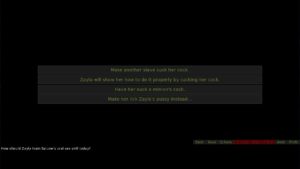 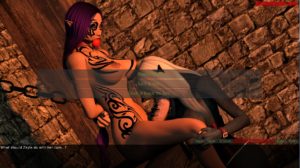 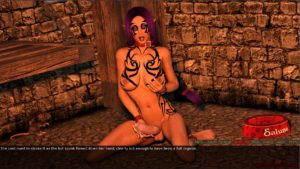