Hi again. I am in fact back in usual time with the new mini-set preview, which features my cute elven side OC, Delfina, in her first starring mini-set without one of the main characters! (Noticed that strange coincidence/situation a few weeks ago, and so I planned on this for a bit – haven’t used her for much in a long time regardless.) EDIT: Second preview added!

The story/setup for this is a few paragraphs… at least for the moment – but I may come back and expand on this a bit later, as I have done occasionally in the past. (Not sure this is short story material, but… maybe?)

As for the base/current story/setup, here that is: One day, a strange older merchant from Nubira with several bodyguards arrived at the Pink Butterfly in Lithorca, and offered a large amount of silver to rent the best girl they had the rest of the day. Most of the girls who were generally considered to be the “top” courtesans at the Pink Butterfly were already occupied, and/or booked… but one was still available, due to a cancellation – the cute elf, Delfina. Upon seeing her, the older man was instantly infatuated with her – as most men were; and offered her even more money, a total of forty-two silver pieces to accompany him during his last day in the city. Shocked at the huge pay offered, which was easily more than she made in a good two weeks time, she eagerly accepted – and took the large pouch from the dark skinned man. After paying her up front, he told her to go up to her room and put her money away – and to take off her jewellery and fancy clothes; he did not want to dirty her finery, or have her lose anything while she was out. The little elf though the older man was quite thoughtful, and quickly did as she was told – and was back down with him in the foyer of the brothel in two minutes, wearing very average looking clothes for a change.

The merchant then took her hand, and led her outside – eager to get started on what he planned to be a particularly exciting finale to his visit to Lithorca. Delfina was a bit confused as to why the older man was leading her down to the docks… but he was paying so very much for her company, that she didn’t want to be rude – so she just planned to go along with his wishes. Strangely, the dark-skinned man led her to an old, semi-abandoned storage barn near one of the old plazas that sold slaves – at which point he started groping her, kissing her, and quickly undressing his paid companion. This was more what Delfina was used to; but she had no idea why he had led her to this old barn… which was fairly exposed – and actually quite close to the “Far Docks”, the lawless part of the city where thieves, bandits, and all sorts of homeless people did who knows what.

But – after he took the elf’s clothes off, he led her over to the main support post of the small barn… and then pulled out a bar shackle from a nearby bucket, at which point he put it around her little wrists – after wrapping her arms around the support post. Delfina was now stuck against the pole, her small elven ass sticking out, totally naked – but she still figured where this was going; the old man was into bondage, which was fairly common in the city… this wasn’t a big deal – and she was actually kind of into it anyway. Strangely though, he took a second pair of restraints and barred her legs as well – to make sure they stayed far apart. Finally, the merchant took an old bit gag from that same bucket that he had prepared… and gagged Delfina as well – now she was a bit unnerved, but she had done far stranger things than this… and for far less coin – surely it would be fine.

The strangeness had only begun, however – as the man then disrobed in front of her, and then took a small black stick out of his coat pocket, which the elf recognized as a magic crayon; a magically charged wax crayon that could write on almost anything. the large man then walked behind the elf where she could not see him, and started writing on her ass… and back – under her hair, where it was clearly visible. Delfina had no idea what it said, but she now was actually pretty frightened – especially as she heard the merchant whisper something to his bodyguards, and then heard them all run off, leaving them alone. The elven courtesan thought she knew what was going to happen now… but interestingly enough, she was incorrect. The big, black man simply walked over to a nearby chair, and took a large bottle of wine out of a basket that was waiting next to it. He then took a big swig of wine, and waited – with a big, creepy smile; and without saying anything to her.

Only now did Delfina finally realize what this old pervert was planning on using her for… but she had already taken the money – and she was now gagged and shacked to the thick support post; she had no way to complain or escape. A couple minutes later, she heard a large number of footsteps approaching – the first of the old merchants bodyguards had returned… and brought over a dozen homeless men from the Far Docks with him. The writing on Delfina’s ass made it quite clear that the men brought to her could use her expensive elven holes however they saw fit… but surely the old man wouldn’t let them actually harm her. Within seconds, the first man had buried his filthy, neglected cock deep inside Delfina’s tight, warm cunt – and barely a minute later he was filling her defenseless womb with a massive blast of spunk… well over two weeks worth. The first man pulled out, and moments later a second shaft was inside her pussy… after which, the cycle would continue – with a good chunk of men choosing her tight asshole instead. This Nubiric merchant had rented her for the rest of that day… which meant there was still over ten hours until she was freed – and this was going to be the longest day of Delfina’s life; but it would also be the most pleasurable one – at least for the parts she could remember, and was conscious for. 😀

Let me know what you guys though of that, and as mentioned before, I may come back and refine and/or expand on this… not sure yet.

Other than that, we will see what happens in the coming weeks – I am still rather drained, but I used what I had to get this new mini-set started, and I think things are looking fun so far. 😀 I will see what I want to do about the polls… votes are so low lately and I am not sure how to improve that. I may post new polls in a few days, I may not – really not sure. I plan to be back with an update in a week or so otherwise, but you guys know how those tend to be late if things aren’t going according to plan. (I do currently plan to come back and expand this mini-set setup, as mentioned above… not sure if it will be “short story” level or not.) Lot of other general housekeeping-esque stuff I need to do for this site and my other pages as well – so who knows what may get done in the near future.

To finish off this preview post, if by some chance anyone else out there would actually like to help support me and/or my work on all sorts of new content, you can get assorted benefits with that; such as getting access to one of my latest/best mini-sets, (this mini-set will go out next month) and/or the remaining finished story sets, and larger versions of the completed animations I have made/posted, and/or the full games I have also made, (the micro VN and Salune’s Slave Training are still available via my Patreon page; not sure what else may come in the future at this point…) check out my Patreon page!: https://www.patreon.com/redleatherart

Any interest, comments, follows, likes, votes, or support really does help. It is hard to keep making new stuff when nobody seems to care. Following me on DA/slushe/pixiv/twitter/whatever doesn’t cost anything – and that all does help spread the word about my work… so please consider doing some of that if you haven’t already. 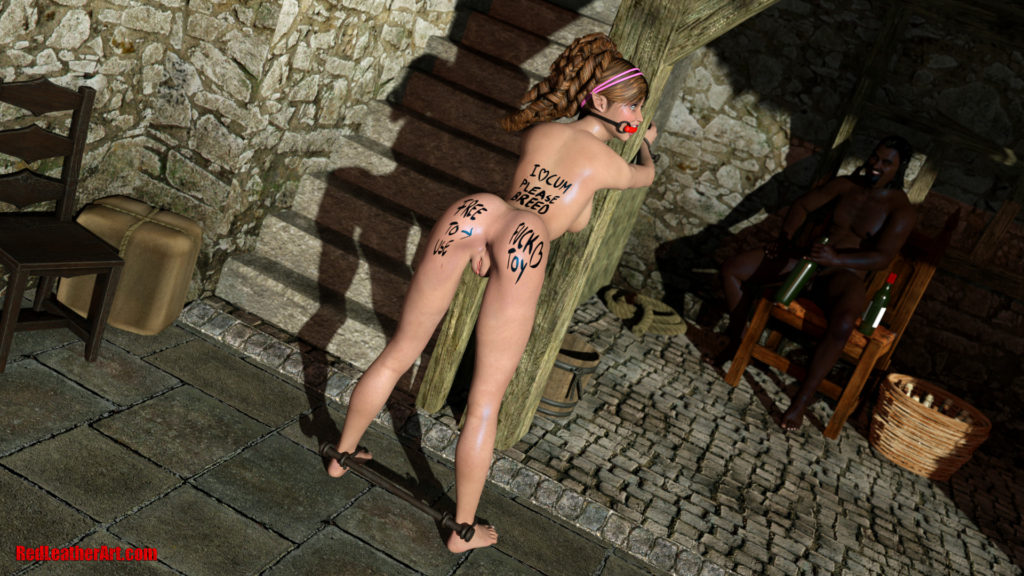 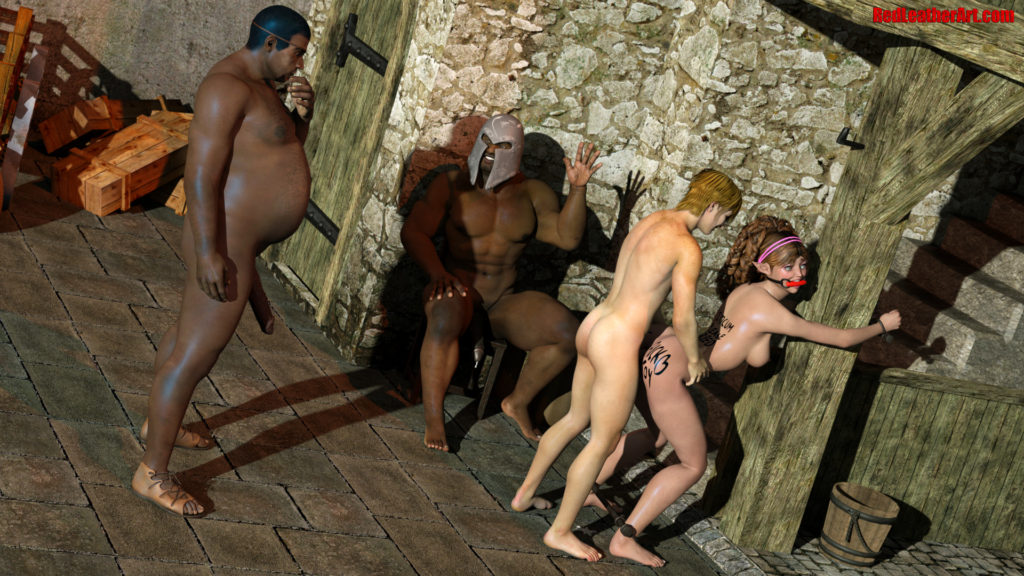