Hey. I have returned with the new mini-set preview for August – which features the return of a very old side character of mine, Ryna! (The older elf sister from RTL.) I have meant to do a mini-set with at least one of those RTL elves for ages, but never got around to it – until now! As you have likely seen from the preview below, this mini-set will center around Ryna and the slender, female Moon Elf Herbalist that her and Arane have been staying with for the past several months. (The big sister once again feels the need to take charge and earn most of their keep; which has only gotten harder since Arane had a kid…) [EDIT: Second preview now available!]

It was time for a lesbian set of some sort this month as well… so here we go; also don’t think I have had a moon elf in the normal content/world (Luscious doesn’t count – as she is an Xmas elf.) just yet… so here is that too. As usual, you can see what I plan to include in some of the tags on this post, but that may be subject to change, and there are several things that I don’t have tags for… so we will see how it goes. The more in depth story/setup is below, after the break, since it ended up being a bit long – but do check that out if you are interested! 🙂

For those out there who want a more detailed story/setup, here that is: After their messy and nearly tragic escape from their previous owner, Ryna and Arane found their way to a small elven village on the edge of the Eternawood Forest – and were taken in by a moon elf there, named Sya’renia. She was the village herbalist – an important position in small elven villages, and she felt pity for these two young female elves that had escaped a life of slavery… so she decided to take them in. The two girls were initially given simple jobs of helping the herbalist with assorted small tasks – generally Arane took care of cooking and cleaning, while Ryna delivered potions and poultices to people in the village; by doing this, the two elves earned their keep – and were on their way to a semi-normal life. However – when the sisters first arrived, it was not immediately apparent that Arane was pregnant; but it was quickly made evident as her belly grew in size – and she gave birth to a little boy not long after. This was not part of their original agreement with their benefactor, though – and Sya’renia was not happy to have to feed yet another mouth after taking in the two of them only a few months ago.

Ryna talked to their employer and landlady in secret, and pleaded with her to allow the three of them to stay; while also insisting that she would do whatever it took to make up for the additional costs of her new nephew. Sya’renia told the older sister to ask the villagers if they had any additional work for her – and said that if Ryna could somehow earn a separate income, that maybe the herbalist could let them continue to stay with her. Arane had her hands full with her new baby, and the housework – so it is effectively totally up to her big sister to pay their expenses. Fortunately, Ryna didn’t have to look hard at all for more work – as almost every male villager already had an additional job offer for her… which mostly involved the men paying the curvy young elf to have sex with them. There was no real choice here – she simply had to go along with it for her sister’s sake… but luckily, sex was probably the thing Ryna was best at – thanks to her being ordered to service most of the men at their previous master’s home. The older sister started whoring herself out – and worked hard to make as much money as she possibly could, almost all of which went to Sya’renia; and very soon Ryna was actually making more than the herbalist did… but she had no way of knowing that. Being a good big sister, she took almost nothing for herself, and only bought a bit of food and/or drink when she was working for long periods of time at the village inn.

Things went well enough for a few months, but then Ryna realized that something was wrong – as she had been feeling sick lately, and her monthly bloodletting was several weeks late by that point. She hadn’t even worried about the possibility of pregnancy for the past couple months – as she had somehow never gotten pregnant in the past, despite fucking dozens of men back at her prior home, and even being raped by an orc! Suddenly though, the realization and fear came over her all at once… she was almost certainly pregnant; and she had likely just made things much, much worse for her sister and herself. Ryna hadn’t ever told Sya’renia what exactly she had been doing to earn all this money – both out of embarrassment, for fear of being thrown out… but it was extremely obvious to a several hundred year old elf such has her anyway. The herbalist knew what Ryna had been doing since the first week – and not just because the men in the village told her; but – this was all going more or less according to plan… so she let it continue, until things finally reached this inevitable complication.

One fateful afternoon though, Ryna ran up to her landlady sobbing uncontrollably – and told her everything; about how she had been selling herself to the villagers and travelers, and about her own pregnancy. The older sister slung to the beautiful moon elf, and pleaded with her to let Arane and her baby stay with her – and that if her baby was a problem, that she would manage on her own somehow… maybe live at the inn, and continue selling her luscious body as she had been. Surprisingly though, Sya’renia patted her head, and helped her to her feet – after which she held the sobbing girl tightly. After a moment, Ryna had mostly composed herself – and the herbalist told her that it was fine; and that given all the money the older sister was making, she could definitely afford to let her have a baby too… maybe even more than one. However, the moon elf explained that there was one important stipulation that the older sister had to agree to – which Ryna did… without even hearing what it was. The new requirement was shocking to Ryna – she had to service her landlady whenever she wished… starting right now! Sya’renia then led the older sister into some playful, yet passionate sex… the first of many such encounters between the two of them.

The truth was that the herbalist had (in part) taken them in because she had her eye on the two elves, but especially Ryna. She was also slightly hurt that the young elf had never informed the herbalist about selling her body – since Sya’renia could have easily made some infertility potions for her, to prevent this situation. (Plus, she would have settled for Ryna servicing her, alone…) However, it would all work out in time; the elves did desperately need to increase their numbers, after all – and this would only help that along. Plus, the herbalist had extensive plans to involve Arane in their lustful escapades as well – all she had to do was tell the little sister about all that her big sister had done for her – and then explain that she needed to do her part as well. Only a few months later, the three of them together were “entertaining” the whole village every seventh day… and those massive orgies started to draw in men from nearby villages as well. Two months after that, Arane was pregnant yet again – and even Sya’renia got pregnant around the same time – starting a cycle that would continue for decades to come, with the three lewd elves having dozens of children… and learning the true meaning of the word pleasure – and taking great care to teach that meaning to all that came their way.

I hope those who read all that liked it, and do please let me know if you did. 🙂

For future news, I should be back in a couple days with the poll results, and more polls of some kind; maybe some new side renders the week after that. I likely won’t bother with any special polls for this year’s anniversary since nobody has been voting in the polls anyway. Besides, there is only one major option left in terms of subjects for the upcoming anniversary set, there isn’t much to decide on regardless. (Onyx doesn’t count as an option yet – and I likely wouldn’t let her be one even if I had finished the writing for LITC 6… it just doesn’t seem fair.) I have a ton of stuff to finish still – but allegedly September will be better… so we can see how things go. So much to do, so little time, etc…

And as always – if anyone out there would like to help support me and/or my work on all sorts of new content; and/or perhaps even get access to several of these mini-sets and/or lots of other rewards too, like the other finished story sets, and larger versions of the completed animations I have made/posted, and/or the full games I have also made. (The micro VN and Salune’s Slave Training are still available via my Patreon page; and I hope to be able to restart work on the newer game I was working on sometime soon… maybe.) Anyways, check out my updated Patreon page!: https://www.patreon.com/redleatherart 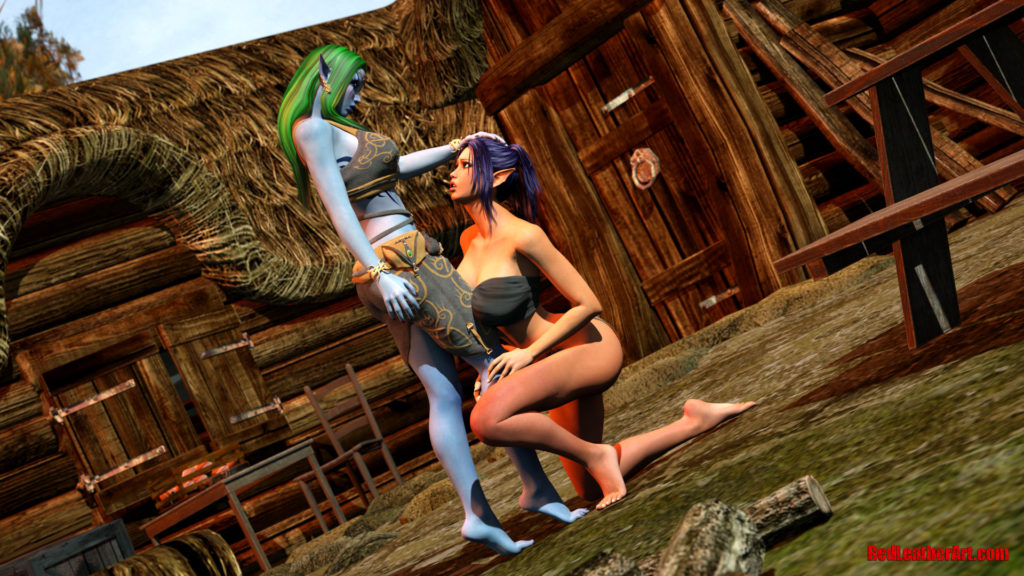 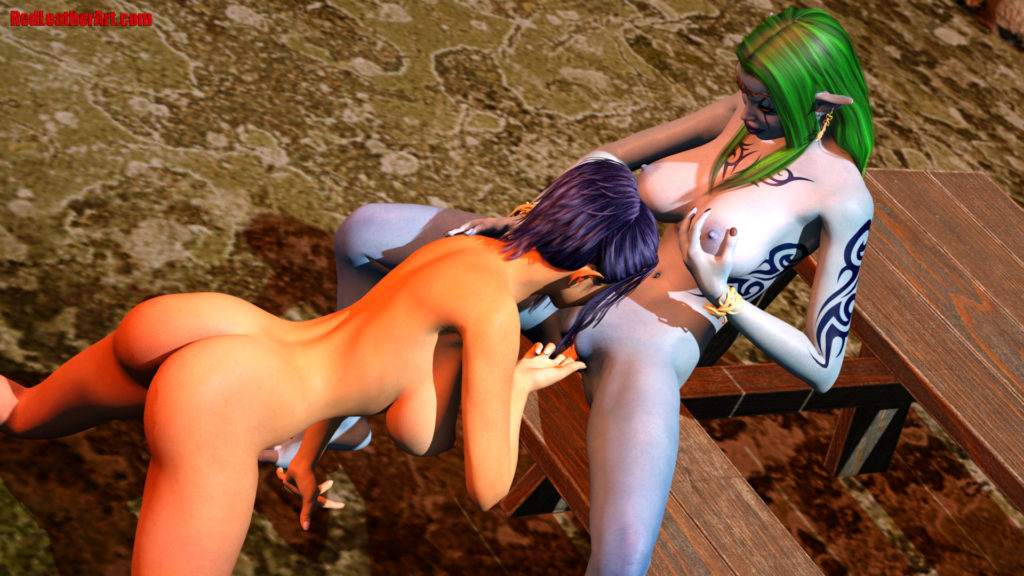