Hi again! Sorry this is a few days later than I was planning, but I ended up just waiting to post the new DA stuff until the mini-set preview was done so that I could post that too. (Also I’m still trying to fix one thing in the second new DA image – I have not had much luck so far; I may have to make something else if I cannot fix this tonight.) So whenever I can get this other DA image situated, (probably tomorrow) I will post this all to DA. In other news, I am planning to post an additional voice acting audition on another site as the first one has not gotten much interest so far… (plenty of time left though) but I will likely post an update about that tomorrow or possibly a bit later – when I either post the new audition or the DA stuff… maybe both.

Anyways – the sexy new preview of this very special mini-set is below; the subject of which was voted on by my mid-level patrons. The mini-set for December stars both James and Belle the Xmas elf – as seen in a few images on my DA page. (Surprisingly this was one of the two options that tied for first place in the poll, so I had to break the tie – and I chose this one as it is hard to involve the main male characters in these mini-sets.) This is Belle’s first mini-set… so I wanted to make it really nice and special; and I believe I have done that. (I may add her to the characters page now – even though she is just a seasonal side OC.) I had a lot of fun working on this mini-set, (probably too much) and I will almost certainly expand it even further from it’s currently planned eight images. (I am still rendering the last few, but I really do want to add a little more – or put in some alternate angles or something.) Whatever this ends up being in total, it will go out to appropriate patrons starting with next month’s rewards message. (EDIT: This mini-set ended up being 21 images.)

The story for this mini-set is that Belle is making her last stop of the night, bringing gifts to all the good people who have been kind and generous this year; when she realizes that she is one present short – she has no gifts left! Belle enters the small cottage anyway… only to find a handsome man waiting for her with a big smile and her favorite – milk and cookies! Belle couldn’t even remember the last time someone had actually thought of her on Xmas… she was so touched and happy. It was so awkward that she had no presents left to give him; but she knew one way to really make it up to James – and show him how much she loved it when people thought of others (especially her) at the same time. 🙂 A long night of passionate sex ensues – and Belle had better be careful; or she might be the one who leaves with a present tonight! 😀

So, as per always – if any kind/awesome people out there would like to support me and/or my work on all sorts of cool new content; (like the new slave training game I have posted previews of recently) and/or perhaps even get access to several of these mini-sets and/or lots of other rewards too, like the larger versions of the completed animations I have made/posted and/or the full games I have also made (and am currently working on) – check out my Patreon page: https://www.patreon.com/redleatherart 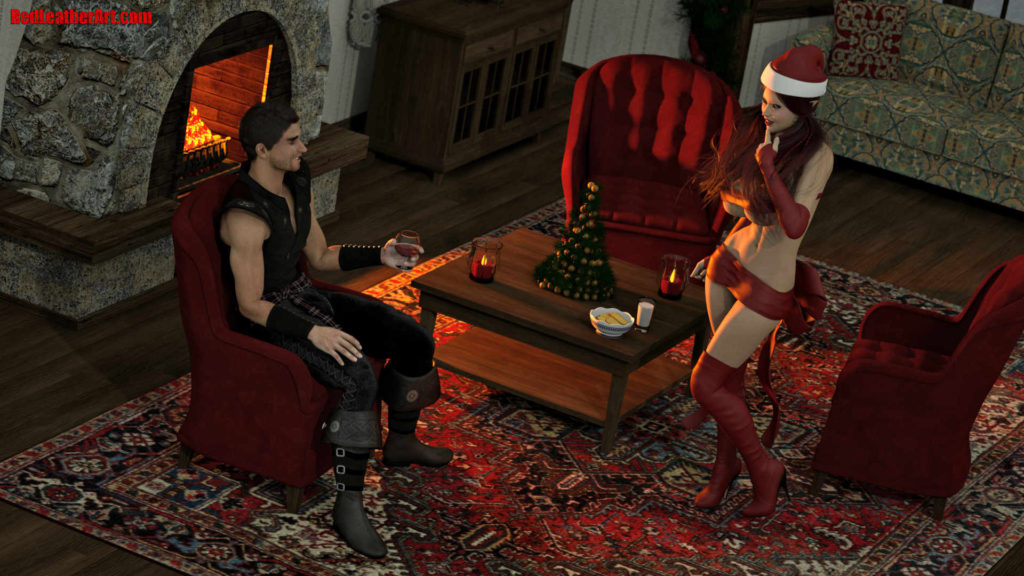