Oh hi. So this is way later than I was ever thinking it would be when I first made that last post, but this past week and a half has been baffling and left me little time to work on all this, as I mentioned in one of the edits to the previous post. There has been horrible weather – like advisories against going outside because of the heat/humidity level bad; and assorted other weird shit – a neighbor’s house was broken into, my primary doctor is retiring suddenly and I had to reschedule at an awkward time for my yearly physical, fire alarms in the middle of the night… and other shit too. It’s been interesting – but very busy and tiring.

I am still finishing up the one last new DA image… so I think that should all get posted tomorrow, maybe Friday – I hope. Also apparently DA removed one of my old deviations last week for some alleged policy violation… what exactly it was, I have no idea – they failed to specifically mention anywhere. (Not the best sign, from a site quality standpoint…) I have always been careful to not do; I have appealed it but not heard back yet. I really hope this works out in my favor; I have heard assorted horror stories about things like this snowballing… but there is no legitimate reason for this removal as best I can tell.

So anyways – the preview for this month’s new mini-set is below! It stars Zayla and centers around her testing out a glossy new toy she has recently acquired; a fancy lacquered box of lusty tentacles! I have wanted to do a Zayla mini-set with tentacles for a while… especially with these newer tentacles; so here it finally is! Zayla is in a slightly modified version of her normal outfit (no boots, no nipple charms) – to further enhance the fun from the tentacles; of which she has plenty in around seven images. I will likely extend this mini-set if I can get the time, but as I mentioned above, this past week or so has been a total mess, and I can only hope that this coming weekend and what follows gives me more time to work on this stuff. I hope to be back in a few days with new polls and a general status update for the site, regarding a few other things. (I just have had no time recently.)

So to conclude, if any of you out there would like to support me and/or my work on all sorts of cool new future content; and/or perhaps even get access to several of these mini-sets (or the polls to help decide them!) and/or lots of other rewards too, like the larger versions of the animations I have made/posted and/or the full games I have also made (and am currently working on) – check out my Patreon page: https://www.patreon.com/redleatherart 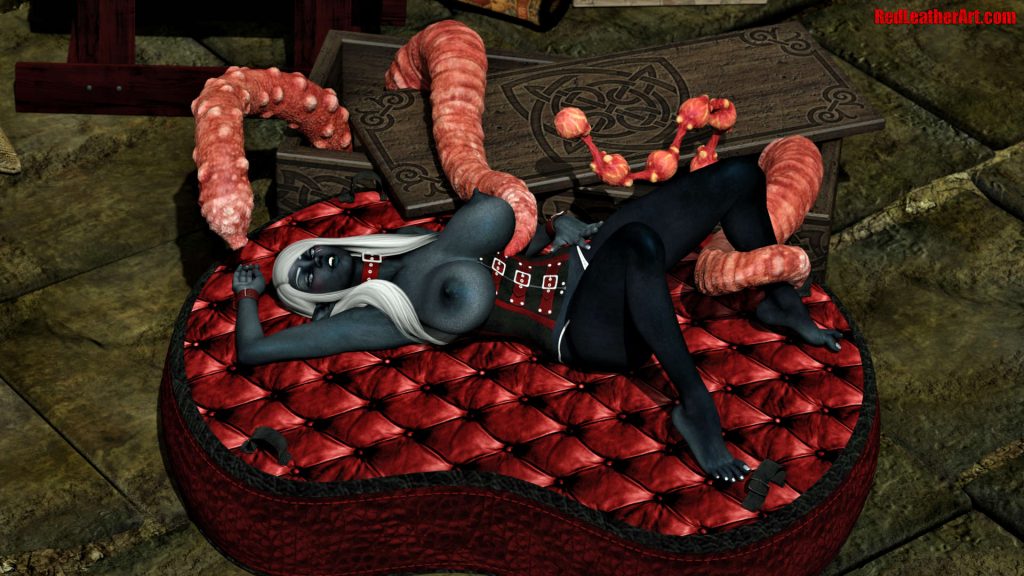