Hey. So I fixed the old tattoo problems I was having for the most part. I got most of Salune’s old tattoos working except the arm ones. (Way too complex for me to bother trying, they didn’t look that great anyway.) So the question now is; do I keep her with clean limbs or do I put tattoos on her arms/legs too? (I can edit her bio to reflect the changes later if need be; I also would like to change her hair as the one she has now looks nice but is so annoying to work with on my end.) Also, having to do all this crap manually has actually been quite useful for me, as now I can work in custom tattoos and stuff like that for future projects.

Below are two basic preview images of Salune in Octane. The left image shows her with clean limbs, the right image shows one attempt I made to give her arms and legs some tattoos also. (I wanted to give her leg tattoos before but I didn’t have any good ones that worked automatically. It’s the same one on each arm/leg, just legs show better from the side/back.) The right image is by no means final, it is just something I made to show one possibility of limbs tattoos. There is a poll on the right, asking which you prefer. Votes there and/or comments here would be appreciated. 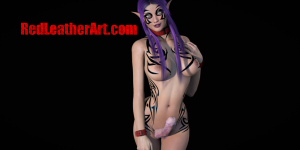 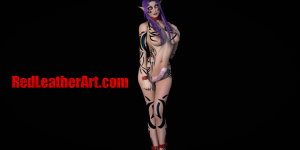