Hey again everyone. I am back with the new mini-set preview for this month… and it is a special one for a few reasons. It is from a list of ideas that I have set aside that I have been meaning to do mini-sets or something of for a while, but have not yet gotten to for the most part. (Most of which have elaborate or at least more detailed than usual setups.) I only mention this is explain the longer and more descriptive than usual set up bit below… but more on that shortly. The other main reason this mini-set is special is because it is the first mini-set (or content that I have made as far as I remember) that features the same character twice… (Doppelganger! – at least a few people wanted to see this according to old polls) because it is another of those dream scenarios – this time for Salune instead of Karen.

I had most of this written already, and just had to finish it – so I decided to just go ahead and post this first little story publicly. I hope to bring more of these special concept mini-sets (or whatever they end up being) and the stories that go with them out someday – but we will see how this first one goes… this is a test of several things; so I will see if people like it. (This is the first short story type thing I have posted here… so I will be watching to see if there is any appreciation of it.) Other quick note – I hope to get the new DA stuff finished in the next couple days.

Due to the long and short story level of this setup, I have a very brief summary just below, and the actual full setup/story bit after the “continue reading” tag at the end of this post for those interested. 😀

To briefly summarize: Salune’s evil nightmare clone fucks the shit out of her in what is currently eight images… but that may go up as usual. (Last month’s mini-set got several additional alternate images by the way.) Whatever it ends up being in total, it will go out to appropriate patrons starting with next month’s rewards message, as per usual. Important side note – not all the content/stuff in the story is visually included in the mini-set (rather obvious, but just saying) – check the tags for an idea of what is currently in here; though as I said, this may be added to.

So as per usual – if any kind/awesome people out there would like to help support me and/or my work on all sorts of cool new content; (like the new slave training game I have posted previews of recently) and/or perhaps even get access to several of these mini-sets and/or lots of other rewards too, like the larger versions of the completed animations I have made/posted and/or the full games I have also made (the micro VN and Salune’s Slave Training are still available via my Patreon page, and I hope to have a beta of this newer slave training game within a couple months; but things got pushed back a good bit when my previous voice actress backed out after making me wait for four months… which had already thrown me off a bit) – check out my Patreon page: https://www.patreon.com/redleatherart 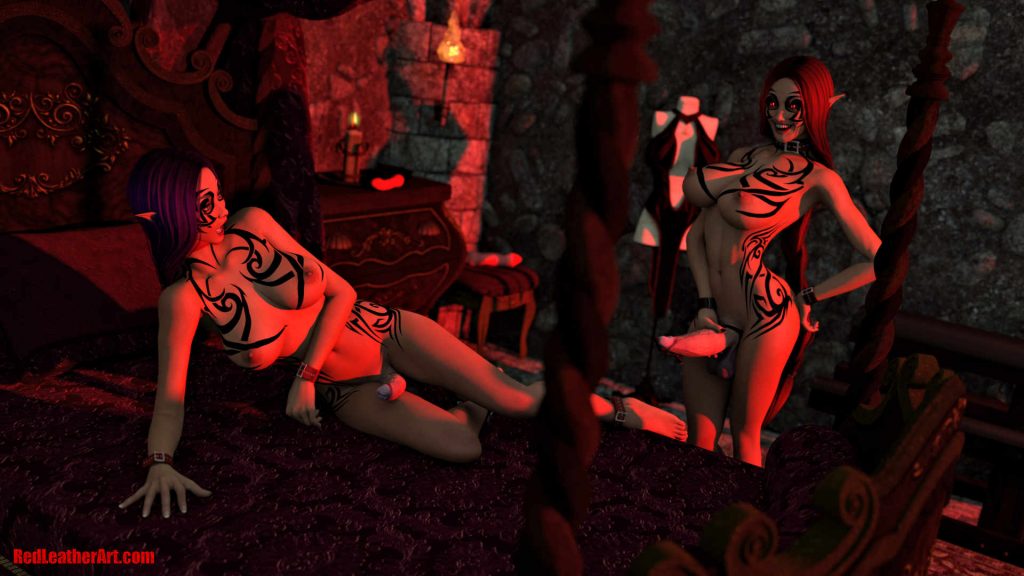 The set up for this mini-set is less complicated than it seems… (but more detailed than usual) it is simply a nightmare that Salune has one night after a day where she barely got any sex. This in part causes her to have a terrible nightmare that she was all alone in Zayla’s lair being chased down the dark halls by a powerful monster. She ran all over looking for help and trying to hide, but everyone else was missing… and the monster was catching up to her. Salune is terrified and finally ran to her mistress’ chambers for help – and is heartbroken and horrified to find it empty; even more unfortunate for her, is that she twisted her ankle while looking all over Zayla’s room for any sign of her mistress… which means that she could no longer run away – so the poor futa elf just climbed onto Zayla’s bed and whimpered and sobbed. Within moments, the monster finally found her… and Salune was trapped and all alone.

The nightmarish creature casually walked up to a scared and lightly injured Salune who was lying on her beloved mistress’ bed… while stroking her large cock. Salune is confused, horrified, and strangely aroused to see a hyper-charged nightmare version of herself getting ready to fuck her senseless. With a bit of muscle, bigger tits, huge balls, and a massive cock that put even her normally impressive rod to shame… Salune knew there was only one thing that an evil version of herself that looked like this could ever want. The doppelganger had blood red hair, glowing red and black eyes, a black tongue, a black-steel cock ring… and her cock was already leaking a small stream of black semen; her nightmare’s proud shaft was clearly rock hard – and ready to pound her wimpy normal self into complete submission. The weak futa elf begged her evil copy for mercy… and said that she just wanted to wake up and see her mistress again; but the doppelganger scoffed at such pathetic talk – this was her world… and she needed holes to fuck.

The poor futa elf is fucked harder and longer than she could ever remember before by her nightmare self – and blacked out several times, only to wake again to pretty much the same scene each and every time; being thoroughly bred by her evil, red-eyed self. Of course, the doppelganger gave her no mercy and kept fucking her and filling her with her thick, black seed regardless of whether she was awake or not – her pleasure was far more important, after all. The weak futa elf was force fed impossible amounts of her nightmare self’s hot, sour, and yet strangely addictive cum. After what feels like days, Salune is distraught to find her belly bulging a fair bit from all the cum that was pumped inside her various holes… and at the news from her doppelganger that she is definitely pregnant by now. Salune cried even harder than before and whimpers softly as she feels her overstuffed belly… and the noticeable heat within; as she desperately tried to crawl away with what little strength she had left by this point – her abused holes gaping enough to leave a constant stream of her clone’s hot, black spooge. The terrified and thoroughly abused Salune desperately cried out for her mistress… begging Zayla to save her – from what was effectively an improved and dominant version of herself.

Her evil nightmare self just laughed, grabbed her leg, pulled her back with one hand, and backhanded her for being so very pathetic. The evil Salune then proceeded to flip her onto her back; and climbed on top of her in order to mount her normal self’s inferior cock – to further violate her and show her how worthless and weak she truly was. Salune can do nothing but watch and cry as she was ridden extra hard by the embodiment of her desires… and is unable to resist her nightmare’s impossibly tight and hot vagina – it felt like it was literally sucking the semen right out of her already sore cock. Her evil copy’s heavy balls and massive shaft constantly beat against Salune’s bloated belly with every thrust; and each smack let out a small squirt of her doppelganger’s thick, black cream. The crying futa elf was forced to inseminate her evil dream-self – somewhat against her will – multiple times… she lost count as to exactly how many; but it was enough to pretty much guarantee pregnancy on her end as well. Nightmare Salune was more turned on than ever at this stage; she had completely and totally dominated her weaker self – and sat up a bit to let Salune’s weakened cock flop out of her well-bred fuck hole… but pussy was strong enough to not let almost any of the futa elf’s cum drip out. Her nightmarish clone then sat back down and rubbed her extra-thick cock against Salune’s inferior rod for a short while… and blew several loads of searing hot black spunk all over Salune’s chest, face, and bulging belly… which embarrassingly, only aroused Salune even more. 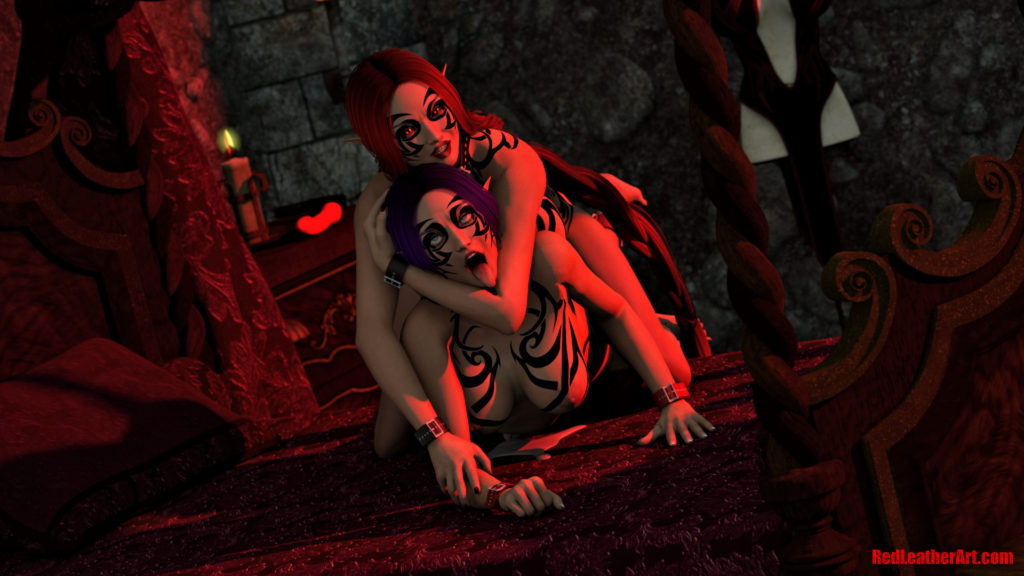 In the end, both Salune and her doppelganger are covered in a mixture of both of their semen… and both were almost certainly pregnant from the dozens of creampies they had given each other. Between the two of them, there had been well over a hundred orgasms over what seemed like weeks now to Salune. The evil version of her then stuffed her enormous and somehow still hard penis back inside Salune’s already overfilled pussy – causing her a bit of pain; before leaning down to kiss her. She rubs her weaker self’s considerable pot-belly while gently pistoning into her and tells Salune – “This is what we both really want…” before giving her one last, massive creampie – one that is close to breaking Salune completely; except it is cut short by Salune finally waking up from her nightmare. Salune finds herself on the floor of her cell in a rather large pool of what she suspected was her own semen… and yet her whole body felt strangely sore and weak; even stranger is that her one ankle even hurt – just like in the dream. However, the really strange thing is that her pussy was gaping a fair bit… and there was a steady stream of fresh, warm cum leaking out of her pussy; and that didn’t make any sense – she couldn’t possibly have done that… it was just a dream… right?

[The End…?] ~Nightmare Salune will probably return… when you least expect it.~

I hope those who bothered reading this liked it; comments, support, and such would go a long way in helping pave the way for more content like this in the future. 🙂